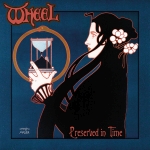 Dortmund, Germany based Doomsters WHEEL have finally delivered their long awaited follow up to their 2013 sophomore album “Icarus” and what a follow up it is! They have taken a lot of people by surprise and are turning a lot of heads already with the recently released “Preserved By Time” which sees the band go into full on Epic Doom Metal mode and delivering an album full of extremely catchy hooks, excellent riffs, lush clean vocals and hefty heaviness courtesy of the powerful rhythm section who anchor down the bottom end of this weighty doomed beast with impressive tightness. Main songwriter Benjamin Homberger has without a shadow of a doubt written his best riffs and music to date and crafted a majestic nigh on perfect Epic Doom Metal album channelling the spirit of mid-late 90s SOLITUDE AETURNUS with seemingly impressive ease, with vocalist Arkadius Kurek sounding like an absolute deadringer for SOLITUDE AETURNUS vocalist Robert Lowe in many places, with his rich vocal tones sailing smoothly over the musical sea of delightfully dark and doomy riffs with his catchy vocal lines wrapping themselves around the music which are guaranteed to embed themselves into your consciousness for days to come. There are definitely plenty of earworms throughout which will slither out of the speakers and nestle their way into your head, the opener ‘At Night They Came Upon Us’ being a great example and it sets the bar for the rest of the album. The production, once again handled by guitarist Benjamin and bolstered by an excellent mix and mastering job by Dennis Koehne is impressive, professional and powerful sounding, quite polished but definitely not over produced, is a very organic sounding production and each instrument cuts through the speakers perfectly. In keeping with the tradition of all the best Doom Metal bands that came before them there is also plenty of diversity in the tempos, WHEEL shift from plodding and crawling slow passages to more uptempo energetic sections. These gloomy grief filled Germans have produced one of the best Doom Metal albums of 2021 and also of the past two decades at least in this writer’s opinion and “Preserved In Time” will definitely appeal to any serious fan of Epic and traditional Doom Metal. The best album SOLITUDE AETURNUS didn’t write?! www.facebook.com/wheeldoom, www.facebook.com/cruzdelsurmusic