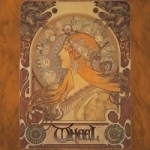 The wheel of time is turning and if it comes to the German newcomer WHEEL it’s turning heavily back in time to the good old times of traditional Doom Metal – yes the times when the one & only Metal god BLACK SABBATH was ruling the northern and southern hemisphere. Northern Silence including their sublabel Eyes Like Snow are quite busy these days releasing one interesting debut after another and this 8 track voyage back in time is no exception from the rule. The band was founded in 2006 under the name ETHEREAL SLEEP but changed their name in 2008 to the more memorizable name WHEEL. The band has found the perfect cover artwork for their self titled debut, a cover which every real Metalhead would like to see on vinyl to fully enjoy it – and Northern Silence will not disappoint any LP fanatic because the vinyl version is already planned!. Musically the band is heading into the 70s Doom direction, with 8 tracks full of old Doom vibes – the songs are passing by and with every additional round further layers are surfacing with an extreme focus on the vocals and the bass – perfect example is the track ‘Only God Knows’. You don’t have to be grown up with this style to become a fan of this extreme slow music – measured by 2010 standards when everybody is talking about songs with minimum 200 bpm – but if you give WHEEL a chance they will for sure not disappoint you. Maybe not a release for the majority of the current Metal fans but nevertheless a release which will make the small Doom community more than happy! www.myspace.com/wheeldoom, www.northern-silence.de