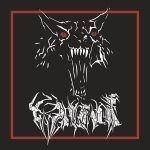 Finland, whenever this Scandinavian territory appears in your mind, immediately the head starts imagining the land of a thousand lakes, the brazen and engrossing arctic landscape and all the absolutely best and otherworldly early 90s Finnish Death Metal bands lurking in the depths. WINTERWOLF rise from the depths of the Finnish Pampas and leave their other projects to the left. Members of DEATHCHAIN, JESS AND THE ANCIENT ONES and DEMILICH are bustling around here. With WINTERWOLF, a possibly dead-gone chapel rises from the Finnish underground. The band, whose original cast only consists of guitarist Corpse, has existed intermittently since 1997. It was the predecessor of the Death / Thrash troupe DEATHCHAIN and first WINTERWOLF demos were written in the late 90s. In the mid 2000s, Corpse reactivated his band, which released their debut album "Cycle Of The Werewolf" in 2009 with a retouched line-up. A modest decade later, the northern wolves are back as the moon is again favorable for a hearty howling and the successor "Lycanthropic Metal Of Death". Ten years might sound a long time, but time is relative and played a rather subordinate role for the sound of the Finns. WINTERWOLF play "old school Death Metal by fanatics for fanatics" and only transformed with their raw and atonal sound scores through its rancid and moss laden guitar walls and the oppressive bass. And, for the description of the vocals one is only too happy to resort to the descriptive phrase of the "burped vocals" delivered by Corpse and Antti Boman (DEMILICH) in form of ‘Abominator’. In songs like ‘I Am The Beast Of Death’ or ‘At Dawn They Eat’, you can already see the chunks of everything rotten and dreadful. The wolves like to play with speed – sometimes they play slow and grinding as two millstones on cuddly course and another time they rely on the blast beat based spontaneous destruction. Their brutal Death Metal with breakdowns or a quick Punk beat on the floor in pieces such as ‘The Crypt Of The Werewolves’ or ‘Thisishispit’ rattles and rumbles in all directions where the grunts and growls are nasty and the mood is unsettling. Significantly carried mid-tempo and sawing guitars appear again and again and pull in a tough maelstrom. Of course, 35 minutes in ten years is clearly laid-out, it really beats that and reminds in the best sense of the ancestors of the genre. Here the Finns pull their boots through and unpack rows of original genre sounds. An own note or signature remains hidden on "Lycanthropic Metal Of Death", so you have to like the sound to warm up with this second album. Everything from rancid production to biting up-tempo and mid-tempo battles to the founding fathers is reminiscent of this. WINTERWOLF’s old school Death Metal is going harshly forward and splitting properly which will make you being nostalgic about the undefinable and out-of-this-world Finish Death Metal movement during 90s. The chosen style does not scream for innovation by nature and that’s a good thing. From time to time, "Lycanthropic Metal Of Death" might be a bit more catchy and rousing and here you just have to listen to the disc at full moon. The fans of the old school are welcome to test this, which is now released on CD, LP and digital formats in co-operation with Svart Records. Explore more about the band at www.facebook.com/winterwolfofficial and visit their label page: www.svartrecords.com.

WINTERWOLF - Cycle Of The Werewolf - by Julián "Lone Wolf" Núñez