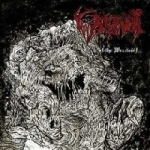 With such a name one can think this is: a) some kind of Folk Metal band or b) some sort of evil necro Black Metal band. In this case none is true. This is a bare bones old school Death Metal band that reeks in sound the very first DISMEMBER guitar tone along with heavy touches of “Clandestine” era ENTOMBED. It must be sure to assume you know get the picture. Well, for a while add British punks BOLT THROWER (yeah, I know they are not punks, but they called themselves like that) and voila, you got the sound of the band. To start, I must add that WINTERWOLF is the prequel for DEATHCHAIN… yes, the Finnish Deathrash combo… in a twisted turn of fate, they decided at one time to resurrect WINTERWOLF and release this album (with Antti Boman of DEMILICH on vocals! – Frank)…a bit strange move if you ask me. But on the other hand, while DEATHCHAIN is a competent band, WINTERWOLF is the better of both. Yes, maybe this old school Swedish Death Metal is becoming a big trend… yes it is… but to my eyes (and ears specially) is not such a bad thing compared to retro Thrash or some other worthless Metal sounds… so I just enjoy what I can from it. On this release, everything has been done and there is not a single bit of originality. None. But I do not care as long as the music is good, and yes, here it is. Is this the best I have heard of the style? No, there are many others with better releases around BUT, and here is the great part, that bits of the aforementioned BOLT THROWER style are what is setting this band a bit apart form the rest. If they decide to have MORE influence of those British rabid dogs, and leave a bit the Sunlight sound, I am sure they will simply KILL. No other band (besides Chicago’s BLACK September) I have heard in long time, comes as close to have that BOLT-ish aura with catchy hooks… Ok, they still don’t have it right now, but one can feel they are near. Damn near. So, assuming they take this more serious than the main band, and that they receive the honest feedback they need, and leave the Swedish sound to others that do it better, there is a bright future ahead. By the way, the cover song (what else ‘Cenotaph’ from… ah, you know) is beyond killer. I just hope they do find the real winter and avoid the dreaded summer… www.myspace.com/winterwolfofficial, www.xtreemmusic.com