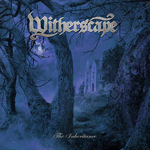 The print media and lots of sites on the web already wrote tons of stories and reviews on this new band. But still I think some of you might not know that WITHERSCAPE is the new baby of Mr. Dan Swanö, who I really don’t need to introduce to anyone here. This multi instrumentalist and studio genius started this band with Ragnar Widerberg, who took over guitar and bass duties while Dan did the rest of the instruments himself, as with lots of his countless bands and projects. We all know about the background of Dan Swanö, but nothing is known about Ragnar Widerberg, who seems to be a blank sheet not only in Metal, but in musical history in general. So, what is to expect from such a collaboration? Everything and nothing, I guess. And what do we get? A modern Art Rock album with tons of Death Metal, a lot of ideas and unhindered creativity. The opening ‘Mother Of The Soul’ already pulls out all the stops and shows most the many facets of WITHERSCAPE. From the harder, yet melodic beginning with the alternating clean and growling vocals to the RUSH styled break in the middle with some jazzy notes back to the melodic start, this song catches the listener from the first second. ‘Astrid Falls’ is cut from the same cloth, only this time I thought of MARILLION in the more quiet moments. And the keyboards casades that show up for a little moment are finest 1970s school as well. Those constant, fluent and often unexpected changes from Art Rock atmosphere to harsh Death Metal styled parts are the strength not only of this song but of the whole album. The two fine starters are topped by the albums hit ‘Dead For A Day’. An acoustic intro paves the way for a chorus that’s the nearest possible connection between catchiness and extremity – earworm guaranteed! But than, all of a sudden, we have heavily grooving parts reminding of mid 90s Metal and a contrasting finishing chorus in AOR style. If this sounds confusing, let me tell you one thing: it is confusing on the first listen, but it works out damn fine. After such a real hit, the next song ‘Dying For The Sun’ has a hard standing keeping up these trademarks. So WITHERSCAPE don’t even try it and come along with a quite relaxed and Art Rock based little gem, where sky-high keyboard mountains meet Death Metal and sparsely arranged moments. ‘To The Calling Of Blood And Dreams’ is pretty conventional as far as the composing is concerned, yet it doesn’t lack neither breaks nor variability. Enchanting uptempo Metal with galloping keyboard melodies open up the quite catchy ‘The Math Of The Myth’, where somehow familiar sounding alienated vocals lead to keyboard solo parts that Rick Wakeman couldn’t have done better and more appropriate. ‘Crawling From Validity’ masters the balancing act between Art Rock and extreme Metal easily, with a few complex breaks and more fine keyboard cascades. Finally ‘The Wedlock Observation’ culminates the qualities of the album and finishes the story that WITHERSCAPE tell us here. The short instrumental title track, played on a piano, calms down the listener and concludes a really fine debut album. ‘The Inheritance’ is another shining highlight in Dan Swanös and the first in Ragnar Widerbergs discography, with hopefully more brillant albums to follow from both of them together. ‘The Inheritance’ is also available in a limited digibook edition that not only features a short story accompanying the lyrical concept but also includes two cover tunes as bonus tracks – the above mentioned length of the album refers to this edition. These tracks are ‘Last Rose Of Summer’, the most untypical, yet fitting JUDAS PRIEST cover you might expect, and an interesting version of ‘A Cry For Everyone’, originally recorded in 1972 by Prog Rock heroes GENTLE GIANT. If you want to find out more or have a listen: www.witherscape.com, www.facebook.com/witherscape, or www.centurymedia.com