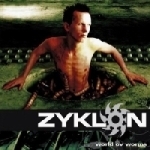 Fuck, this is a great one!!! ZYKLON is a new "all-star" band hailing from Norway, consisting of EMPEROR’s Samoth (now naming himself Zamoth – on guitar / bass) and Trym (on drums), MYRKSKOG’s Destructhor (on guitar) and LIMBONIC ART’s Daemon (on vocals). ZYKLON has nothing to do with Zamoth’s old project ZYKLON-B and is musically far superior anyway! While EMPEROR more and more evolved into a rather complex and sophisticated direction on their latest releases, ZYKLON is mainly sheer brutality, but still on a really high musical level! Every now and then you may recognize some typical EMPEROR guitar parts (especially in the fast parts), but in general these guys are a lot more intense and (just like Destructhor’s main band MYRKSKOG) are almost walking the extreme Death Metal paths. Their country of origin still shines through pretty clearly in the songwriting, but that’s fine with me, as it gives them an even more unique overall approach. They managed to combine several influences from all kinds of extreme musical genres and ended up with an overall, totally skull crushing and excellent sounding result that should easily appeal to all Black, Death and extreme Metal fans alike. Their anti-religious, apocalyptic lyrics (courtesy of former EMPEROR drummer Bard Faust Eithun) furthermore fit the band’s concept and music just perfect, so my closing advice is: make sure to keep the 5th of February 2001 in mind, cause that is the official release date of this masterpiece!! Until then you can already check out the band’s official website at: www.zyklontribe.com.