There must be some strange sort of a virus on my computer! What else could be the reason that whenever I’m doing interviews by email, the answers seem to become shorter than my questions! Okay, here is the story behind it: I was offered to do a face-to-face interview with Zamoth on the tour with CADAVER INC. and MORBID ANGEL, so I didn’t hesitate for a second. When I was finally led to ZYKLON at the backstage area in Hamburg, Zamoth gave me the choice: either a very short face-to face interview now or a lengthy one via email: they had a day-off, so the bands wanted to party a bit. Having in mind the short answers SIRIUS had given me (by email), I took the "long" answers option. Hey, Zamoth, did you intend to give me one 3-words-sentence for each question live? Okay, the next thing was that when I talked to Frank about this, he already saw the disaster coming, because some time ago he had sent about 50 questions for an EMPEROR interview to Samoth and never got a reply. So I reduced the amount of questions (I didn’t have 50 anyway) in order not to shock the genius. Was this a wise or a stupid thing to do? I don’t know, but at least he could have written a bit more at the "adventure" question: usually every musician must have experienced something worth talking about. Well, at least you can imagine what ZYKLON were doing instead of talking to me and I bet there are people who might think that this way they sure had more fun on that particular night. Still, there are one or two interesting facts about the metalhead Zamoth himself and he answered the question quite seriously, so the more I think about it, the more I get satisfied with this ­ so what the heck! 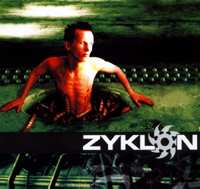 When and how did you get hooked to Heavy Metal, was it a concert, a record or maybe a friend?
"I think it was back in ’84 when a younger friend of mine introduced me to KISS, and shortly after I discovered albums such as WASP’s debut, "Powerslave", "Defenders Of The Faith", etc. I was hooked!"

Do you remember your first Metal record and concert? What was it like?
"The first big concert I went to was GARY MOORE I think. It was a great experience being in my early teens going to a big venue with many metalheads getting the live vibe, and it only got a lot better when I saw bands as IRON MAIDEN, KISS, METALLICA, AC/ DC, OZZY, etc."

Do you still like your old Metal heroes, do you still listen to them and what do you think about all these reunions? (from KISS to CADAVER) Do you like them as a fan or does it make you angry for the sake of art?
"Yes, I still enjoy many of the old classics, like older WASP, MAIDEN, JUDAS PRIEST, OZZY, etc. Many of these bands will follow me to the grave, because they have meant a lot to me when I grew up. I don’t mind reunions. I saw the KISS reunion shows twice. It was good entertainment, but didn’t mean much to me really. If I had seen KISS back in the real classic day it would have been like a dream come through."

Is it possible for you to describe the Norwegian Metal scene in brief? Is there any kind of unity, etc.?
"Well, of course there’s still a unity. Most bands know each other in one-way or another and there’s in general respect between most of the bands. I think the Norwegian Metal scene has become much more independent in the later years. There are a lot of creative musicians here."

I already read a couple of good ZYKLON interviews and your history can be looked up at your website, but what never really came across is the reason why you called your band ZYKLON although you always point out that it doesn’t have anything to do with ZYKLON-B. How much are both the music as well as the lyrics represented by the bandís name ZYKLON?
You woldn’t have had all the trouble of explaining if you had called this band EMPEROR 2000 or whatever. Why and how did you come up with ZYKLON? It can’t be the reason of using a well known name and therefore selling more because everybody knew who is involved in your band right from the start.

"There’s no big "why". We liked the name and decided to use it. I do however regret it at times, as the fans and media have made to big a deal out of the connection with Z-B and the relation of the war. Fuck it, for us the name represents an intense force of energy. It’s not about fucking politics, and it’s not so relevant that the name bear a similarity to Z-B. If this is going to be an ongoing subject, we might actually consider doing an adjustment to the name."
Can you describe your feelings about the following topics: writing music, recording, playing live? 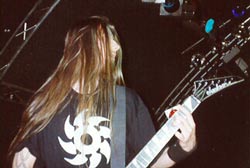 Are you still satisfied with Candlelight? No regrets of not having released "World Ov Worms" via Nocturnal Art? How is the record going?
"I don’t regret not doing ZYKLON via NAP. Candlelight is doing a decent job. No complaints regarding their work for ZYKLON so far really. It’s been going pretty well so far. The album shipped close to 15 000 units in Europe already and it was just released in the States last month. I think also Toy’s Factory in Japan have decided to do a license."

Personally I think that this year there will be 2 albums struggling for the title "Black Metal Album Of The Year": whenever I listen to "World Ov Worms" I’m sure it is this one and whenever I turn on the new SIRIUS CD I prefer that one and vice versa. How did you hear about them and why did you sign them for Nocturnal Art? What do you think about their ‘The Majesty Of The Nightsky’ cover version? How do you find out about promising new bands for your label anyway?
"Even though, neither ZYKLON nor SIRIUS is really to be considered to be "Black Metal", thanks for the compliment! I got sent their second demo from bruto-brother Draconiis and it had some potential, so I decided to give it a go. I’m very pleased with their progression. The new album is really good and I hope it will open more possibilities for the band. I guess I might be a bit inobjective about commenting on the cover track, as I’m playing on it myself and it’s on my label, anyway, it’s for sure a cool cover track. They are actually the first band I ever heard doing an Emperor cover track." 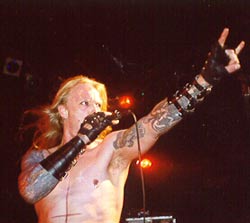 What do you do when you have spare time at home? Something else apart from music? Any hobbies? I guess your times of the christ hunt are kind of over…
"No real hobbies outside music really. My life if pretty much related to music, so that’s pretty much what I do. Christ is dead!"

What are your plans for the future? What’s your priority? ZYKLON? EMPEROR? How do you manage not to get into trouble with your schedule? Two bands and a label…
"Basically, everything I do is a priority, but of course at times I have to prioritise one thing to the others. But you must take into consideration that EMPEROR hasn’t played live since ’99 and we also had a break with EMPEROR for about a year, which allowed me to develop ZYKLON . NAP is also an underground label, but as long as I’m not on tour or away for other reasons, I’m in the office everyday. I basically like to have a busy schedule." 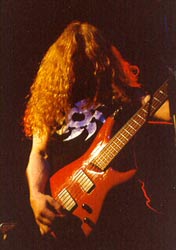 You already achieved a lot in your musical career but do you still have any unfulfilled dreams?
"Well, I’ve accomplished most of the goals and even more than I thought I would accomplish when I started to get serious with music. I decided at a quite early age that this is my life and this is what I want to do. I never focused much on getting a great education or to get a normal job, I just went for my musical interests, and I guess you can say I succeeded. But yes, I still have unfulfilled dreams. When you have reach one goal in life, you always set new goals. My most immediate plans now are to complete the new EMPEROR and of course continue to build up ZYKLON."

On promo photos your band is posing with pistols: are you already CADAVER INC. customers?
"They are already busy taking orders all over the world, but they cut us a very good deal."

Do you have any funny or interesting stories for our readers, maybe about your life on the road?
"Life on the road is usually very funny. On the recent ZYKLON tour we had a day of in Hamburg. We partied at the Reeperbahn with CADAVER and some of the guy’s in the MORBID ANGEL camp until sunrise. It was great fun indeed!"

Any last words?
"Thanks for the support! Log into www.zyklontribe.com to learn more about the tribe. We’ll be back in Germany for With Full Force this summer! Check it!"