This line up of MASSACRE was during the years of 1989 – 1990, and this ‘demo’ was recorded before the "From Beyond" album, not after… and it was never intended to be MASSACRE’s second album as listed. During this period MASSACRE bassist Terry Butler and drummer Bill Andrews were still playing in DEATH, and Rick was already kicked out of DEATH at this time. MASSACRE had split up in 1987… when members Rick Rozz, Terry Butler, and Bill Andrews joined with Chuck Schuldiner in DEATH for the "Leprosy" album. However, Rick was later again kicked out of DEATH in 1989, and after that I had approached Rick about reforming MASSACRE in late ’89… and then we began formalizing the reformation. The truth was at that time Rick was hanging out with a bassist who was playing in THE GENATORTURERS named Butch Gonzalas. And so Rick suggested that Butch come over to join MASSACRE as bassist. Yet we still needed a drummer, and during that time Rick was friends with Joey Cangelosi of the thrash band WHIPLASH from N.Y. Rick somehow convinced Joey to relocate down to Florida from N.Y. to join with MASSACRE, and that is how MASSACRE would be borne once more for its — SECOND COMING! So during the later half of 1989 and the first half of 1990, the MASSACRE lineup was: myself, Rick Rozz (guitars), Butch Gonzalas (bass), Joe Cangelosi (drums). Now, during this time period MASSACRE was already in contact with Earache Records, and the record company heads wanted to hear the "new" MASSACRE. Rick and 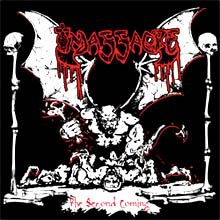 Butch had already started writting material together prior, and decided to incorporate these songs they had into ‘new’ MASSACRE material. So when Joey and I entered the picture, we just needed to ad our parts. Joey was now living with Rick at the time in a house financed by the label, so it was rather fast and easy for them to get the material down. Within a matter of weeks they had six songs down musically, and I just needed to ad lyrics. Although when I came into the picture, I was not at all too pleased with the direction the music had taken. Rick was already trying to change the direction and style of MASSACRE’s ‘Death Metal’ roots, and was incorporating many aspects of power thrash like PANTERA and even funk like RED HOT CHILI PEPPERS into the material. However, after much deliberation and discusion, I relented and gave in, and began writing lyrics. Also, I would like to add that Joey’s drumming on these songs are powerful — aggressive — and just kick ass! I really feel if it wasn’t for his style of ‘Power-Thrash’ drumming, that many of these songs may have not been as strong as they ended up being. So now it was time to go into a studio and record these songs. Now I remember it was summer in Florida, and it was hot. And for some reason every summer — I always get sick! The one thing I remember about going in to record this demo, was just how fucking sick with the flue I was. I was dripping snot out my nose, my throat was raw and numb, my body ached from head to toe, my skull was pounding and my ass was pissing out diarrhea. And yet despite all that, I still went in the studio and gave it my all! My voice was so fucked… yet I tried to be as brutal as my sore-infected vocal cords would allow! A major part of the vocals I mostly spoke through… with an occasional death growl thrown in, but mostly I struggled with the vocals. Yet I remembered that this was only meant to be a studio demo not to be released to the public, but rather a demo for the record company only, just so they could hear what the material would sound like. So I felt I didn’t have to be signing my usual death growl through out the whole songs. I remember during parts in the tracks when I wasn’t signing, I was blowing my nose in tissues, and in between tracks I was running back and forth to the toilet!!! The entire demo was recorded live in the studio… no vocal overdubs… no stopping during the songs, just run right through them… from

the top ’till the end. Then I would take five — go blow brown fluid outta my ass, and right back into the studio to do the next track! OK — so what is now represented on this release is that very same demo, not an full length album, not an EP, not something that was recorded for Goreque Records, but a demo of six tracks recorded ‘live’ in the studio for only the record company to hear the material. This is it, the mystery recording so many fans have talked about, and so many others never knew existed. Recorded almost 20 years ago in the summer of 1990. Shortly after recording "The Second Coming" demo though, the record company decided that they did not like this direction, and suggested we get the original lineup back together and record the original material from the original demos. Seeing as that Terry and Bill were no longer in DEATH after the failed "Spiritial Healing" tour over in Europe, it would be rather easy to get them back in the MASSACRE lineup. Yet it would be a few weeks inbetween before I would learn what was going on…. suddenly I was cut off from everything. No rehearsals, no phone calls, nothing. After a few weeks of hearing nothing and thinking that once more MASSACRE was finished, Rick finally contacted me and told me that he split with Butch and Joey, and Terry and Bill would be reunited with MASSACRE. So then finally, Rick and myself, along with Terry and Billy quickly entered into the studio to record the original material from 1985-1987 on the now historical cult classic 1991 album known as "From Beyond". I never really wanted to ever release this recording. I feel it’s a weak misrepresentation of MASSACRE, and an awful performance by me. Yet, because of circumstances that got way beyond my control and the threat that this would eventually get released in some kind of format. I felt an explaination was needed. It has been released… and so I wanted to add these liner notes to explain it all.