Brian Manowitz – you already heard that name? I’m sure you did! This is the man behind the VEGAN BLACK METAL CHEF. Originally he comes from Tampa, Florida, now he’s living in Orlanda, but still in Florida. The 33 year old guy gets more popular every day. Currently he’s in Australia, joining some cooking shows when we contacted him for this interview. Believe it or not, at the moment he has no sidejob and the VEGAN BLACK METAL CHEF is his full and only job…

How did you get the idea to start such a great project like VEGAN BLACK METAL CHEF?
"I got the idea after being vegan for 11 or 12 years… I realized "Hey, my food is fucking delicious, it’s cheap to make, it does not take that long to make… I feel like I live a very doable form of veganism that a large number of people could get into.” After realizing this, I thought the world should know about it, but regular cooking shows bore me to death. So I combined my passion for making Metal and cooking to make the cooking show I wanted to see.”

Are there any other cooks (worldwide) that you like? Do you know the German cooks Attila Hildmann or Bjoern Moschinski, who get more and popular?
"Sadly I do not have that much inspiration from other popular cooking people. I get a lot of cooking inspiration on just basics. Basic amazing meal in restaurants. The entirety of an Indian menu, an Asian menu, an Italian menu, an American menu, etc… Just classics that deliver time and time again. Many other popular chefs like things fancier or more complicated / expensive than I like. I only go for maximum taste which is easily achievable at home."

When did you start making music and what kind of instruments are you playing?
"My last year of collage I bought a guitar, so since about ’02. I play guitar, keyboard, bass, and program the drums."

When did you get the idea for these vegan cooking videos?
"I have been doing crazy shit like that when I cook for a long time, but I got the motivation to really do it about a month before the first episode. So about 3 years ago?"

What was your reason: animal rights? The environment? Health?
"My main reason is that I do not believe in the exploitation of animals, but the other 2 are great side benefits. I have a more detailed explinaiton on my website."

Do you also live a "straight edge" lifestyle?
"I do not partake in drugs or alcohol, but don’t really consider myself part of the straight edge movement. I simply prefer conscious living."

What about tattoo ink?
"I don’t have any tattoos currently, but if I got one it would be with vegan ink."

Are you already planning to have some tattoos? Would you go for animal activists or vegan themes?
"No tats planned. If I did get some, they would probably be representations of earth, air, fire, water, and void."

Do you also care about these subjects?
"Yes."

Was it planned or have you done one episode just for fun?
"The first episode was named "Episode 1", because I was planning on doing them whether anyone cared about them or not. I admit it’s much more fun with people caring about them."

I guess you won’t make all your videos alone – so who belongs to your team?
"Yes… I actually make them all alone. Me, my tripod and computer."

Have you ever recorded something like a "gag reel"?
"I leave the gag reels right there in the videos. I do not do multiple takes of anything."

The Metal scene, especially the Black Metal scene, is still pretty narrow minded when it comes to a vegan lifestyle. Did you get any bad responses from Black Metal fans because you’re vegan?
"Of course, but I also got way more responses than I thought of "I’m vegan and into Metal or Black Metal… this seems like it was totally made for me” and there are also "Die you vegan faggot”."

Have you started as a cook before or was it just for fun?
"I am a self trained chef and musician. I am just really into both."

It is nice to have a million of clicks, but I think you don’t earn any money with it. So, how do you finance yourself and how do you finance those videos?
"I do get some amount of money from AdSense revenue / youtube ads. I also get money from commission work, live shows, licensing, merch sales etc. I hope to do a national and international cooking demo tour once the cookbook is done."

And what is your real profession?
"Professional asshole." 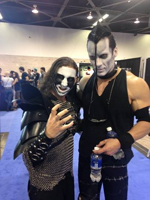 Have you "learned" a real job? What kinda jobs did you have already?
"I have had a huge number of jobs in the past. Everything from being a 6th grade science teacher, neurofeedback technician, music salesperson, telemarketer, computer programmer, and freelance audio engineer / web designer. All of these had one thing in common… They gave me cash and free time to make music."

What do you like most: music, cooking or something else maybe?
"Both, I guess my main passions in life are music, cooking, and mysticism."

In your "Vlog Ep1” on YouTube you’re without make up. Was this one older or are you in some videos with and in some without the paint?
"The regular videos take a very long time to make. It takes a huge amount of time to get into the corpse paint and everything. I will be making many more vlog style videos to show more "doable” veganism in a faster manner."

How did you get all the accessoires for that "Hail Seitan” – cooking? I guess you can’t go into a normal shop and buy something like all these Black and Death Metal and "dark” accesoires…
"They are made by the finest artisans in hell."

Have you made some of your own?
"Yes."

Especially the silver bowl with the metal spikes… Where did you get the knife – looks like you bought it directly from Satan ; -)
"Yes."

Please tell us more about the things / material that you manufacture for your kitchen or your videos. How can you make such a silver bowl?
"Ok, I’m going to break the illusions for you… I get cheap ass silver bowls at various thrift stores and drill spikes into them."

Do you go to a super market and buy stuff for it or how do you manage to manufacture such things? Is it your next talent?
"Hahahah I thought about selling them, but currently with how much I pay per bowl and the amount of time it takes, does not make it worth it for how much they could sell for."

What exactly is made by your own hands?
"I have made some other rubber armor and bracers pieces in the past."

Not only the bowl I guess… How about the knifes???
"I do not make the knives."

Or just for the videos?
"Yes."

Who cooks more often, you or your wife?
"No wife yet."

Have you already ended with the cookbook?
"No there is a significant amount of work still left to do. I should be done with it by the end of this year."

Do you have any animals at home yourself?
"No, I am too transient and active for an animal to own me yet." 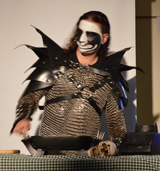 Do you participate in any kind of animal-protection organizations?
"I used to be very active in a group called "Animal Activists Of Alachaua". I still agree with these groups but find other ways of effective activism. We need people for all roles. Everyone should do what they most connect with and where they feel they can give the most."

Do you have any shops that sell vegan stuff in the area where you life or do you also have to order certain things from specialized mailorder companies?
"I only have a few products that I buy which are speciality items, things like the vegan butter, sometimes vegan cheese shreds, and maybe a very few other items. All of these are available in the most common grocery stores in Flordia and even Walmart. Only if I want a huge variety of vegan ice cream treats I would have to go to a speciality store."

Have you also noticed a somehow positive evolution towards vegan related things over the years? What do you think is the reason that it almost has become some sort of trend these days to start living as a vegan? 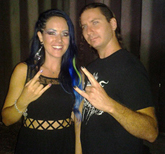 "While I do think it has become more trendy only over the last very few years I will say overall from when I started 13 or 14 years ago, I have only seen the trend slant toward veganism and not away. I take that as a good sign. Trends come and go, this has been around for along time and the recent "trend” is just a boost. Do not follow anyone because of their veganism. Find your own path."

Have you met a lot of other vegan musicians over the years? If so, please tell us some names here.
"Hmmm, the only high profile musician I have met that is vegan is Alissa White-Gluz (THE AGONIST, now ARCH ENEMY). But there are many."

You already did some apperances as VEGAN BLACK METAL CHEF – where have you been? Vegan events, cook shows, music shows?
"Currently I do live cooking demonstrations in full armor / make up with the instrumentals of the episode tracks playing in the background. I just got back from an Australian tour, and have been to many places in the US. There is a vegan cruise, I will be doing this on over Halloween along with several other dates." 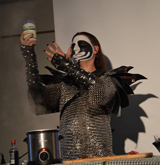 Now you’ve released a DVD. What is on it, where can you buy it?
"The DVD contains the first 10 episodes in much higher quality than what I upload to Youtube. I film in very high quality, but I don’t have time to upload shit like that. So it’s really for people that want a physical thing to give as a gift or support the project in general. They are pretty cheap at $10 off veganblackmetalchef.com . They are also region free. I will try to put more other content on the 2nd DVD when I get done with 20 episodes."

I just discovered FOREVER DAWN – is that your side or first project? Tell us more about it.
"It’s my first project actually. I have been doing FOREVER DAWN for many years, but most was not very high quality of the recordings. It’s my take on "Industrial Black Metal” since I am a big fan of both. I would get bored just playing standard versions of either. I semi recently released the debut album. You can check it out at foreverdawn.bandcamp.com for only $5. I should be playing shows again with it by the end of the year."

Thanks for the interview, Brian!

FOREVER DAWN released a demo ("Victory") in 2005 and a full length album ("The Long Journey Home") in 2014. More information and sound samples you’ll find at the FORVER DAWN bandcamp site. For all additional information on Brian’s BLACK METAL CHEF activities check out the following sites: www.veganblackmetalchef.com or www.facebook.com/pages/vegan-black-metal-chef/113754772042360. The videos can be found at his Youtube channel: www.youtube.com/user/veganblackmetalchef