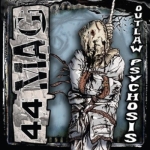 Interestingly this album was already released in August 2013, nearly a year and a half later it made its way to blow my speakers. Early IRON MAIDEN anyone? Mixed with 1990s PANTERA ("Cowboys From Hell" and "Vulgar Display Of Power")? If so, take a listen to the second album by US based 44MAG. Although this release is self-financed the sound is absolutely adequate and songtitles like ‘Leviathan Smiled’ or ‘Mr. Rock’n’Roll’ speak for themselves. Pretty short review, but (sometimes) brevity is the soul of wit. For all additional info on 44MAG check out www.facebook.com/44magmetal