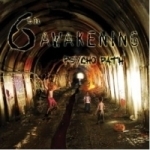 From Umeå, Sweden, comes this 5-piece melodic Death Metal act called 6TH AWAKENING, and after 3 demos it’s time for the band’s debut full-length studio album, titled "Psycho Path". What we have here, is 10 songs – this also including a cover song of TYPE O NEGATIVE’s ‘My Girlfriend’s Girlfriend’. When it comes to 6TH AWAKENING’s melodic Death Metal (with slight Black Metal overtones due to Robert’s harsh vocal parts), for the most part this stuff does appeal to me personally pretty much indeed; it’s well played, heavy, partly mean sounding – and surprisingly technical yet even experimental melo Death Metal that obviously is supposed to raise a few waves of sheer applause in the majority of people, as it should do so. So yes, as said, for the most part, this stuff should go down well for people but some skepticism is met on the record due to female vocalist Lovisa Lundmark. In all honestly, I don’t think she’s that good at all as a vocalist, and the album would have sounded remarkably better without her vocal parts. This is of course a matter of each of our individual taste more than anything else, I think. I overall have nothing against female vocals in Heavy Metal music, as the history has proved so many times that there have always been so great female Heavy Metal vocalists out there, who have deservedly got their names written on the history books due their superiority as vocalists. But the bottom line however is, I don’t think that 6TH AWAKENING really needs Lovisa simply because Robert’s bestially raging vocal parts are the ones that add that extra kicking power into the songs, to make them work on the next level for the advantage of the songs. Lovisa’s vocals basically eliminate some of that power away from their music the band has. So, fire her, and you’ll see that 6TH AWAKENING will be doing much better without her presence in the band. More at: www.myspace.com/6thawakening, label: www.gromrecords.net/tmina.html