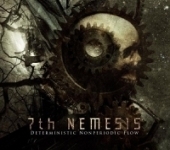 Rising like a Phoenix out from the ashes of SARGANAS, French technical Death Metallers 7TH NEMESIS have gone a long way since the band was put together back in 2001. "Deterministic Nonperiodic Flow" (woah, that’s quite an album title indeed, isn’t it?) is already the band’s 3rd album in order within 10 years (first for me; where have I been?) – and after several listens of the aforementioned album, I am still pretty confused yet exhausted about all these extremes they have gone in between different extreme Metal genres. Saying they represent technical Death Metal may tell something about them – yes, but basically it tells nothing about them at all. The closest description I could actually give about their sound, try to think of some sort of fusion of MORBID ANGEL’s and BEHEMOTH’s masculine brutality and heaviness, combined with both GOJIRA’s and TEXTURES’ uttermost complexity and absurdity as far as overly technical aspects of their songs structures are concerned. This is a really darn complex stuff on "Deterministic Nonperiodic Flow"; so disturbingly complex that at times you start feeling like you’d better to turn the music off for a few saving moments for your sanity’s sake – not because they would somehow bore you but because you get an overflow of oppressive technical skills that the guys so painlessly possess in the 7TH NEMESIS camp. No doubts, they are sovereignly amazing and tight musicians – and this stuff is far from being the usually heard, generic 2nd or 3rd rate extreme Metal shit. It’s just I don’t know whether 7TH NEMESIS’ stuff is for everyone. I do appreciate what they have accomplished on their 3rd offering, and sincerely think they deserve to get recognized even on a larger scale, but having stretched their extreme and strongly unorthodox and screamingly prog-ish Death Metal sound to those unsecure grounds where many have this sad tendency to fail and sink for good, there’s always a risk of experiencing the already safe and firm ground start crumbling below their own feet in the very end, too – despite how technically advanced band 7TH NEMESIS is. Check out especially the album’s grand opener, ‘Distorted Mass (Of Unformed Matter)’, as that works as a good exemplary appetizer what’s to come ahead of you. I did like this record a lot to a certain extent, but at the same time I am not too weak to admit either that sporadically I simply had to walk away out of this stuff, as the complexity level of their songs appeared a too hard nut for me to break. But every time returning back to this massive soundscape of complexities made my time truly worth this record. Partly perplexing, but still a great album this is nonetheless. www.myspace.com/7thnemesis, www.greatdanerecs.com