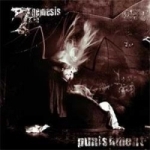 I have no idea if 7TH NEMESIS have matured so much ever since their 2002 promo CD or if good ol’ Stefan simply was in a bad mood while reviewing them back then. Fact is that their participation in this split CD really blew me away in every aspect!! The production is totally crushing, very powerful and easily lives up to current higher standards and therfore already builds a solid foundation for their very convincing songwriting. In all of the featured four songs on offer here the band constantly comes across extremely tight and performs their entire material on a very high musical level, yet totally aggressive and brutal at the same time (‘Blood Drops In Heaven’ being a little exception to the rule here as it starts out almost jazzy before it explodes into another little brutal Death Metal inferno)! It’s kinda difficult to track these guys down within the limited boundaries of a small review, so just image the intensity of CARCASS’ "Heartwork" album (especially in the vocal department) mixed with heavy and brutal Death Metal insanity and you get at least a little clue of what to expect here. I’m personally really looking forward to hear the band’s upcoming full length!! It’s pretty obvious after a couple of minutes already that Austria’s PUNISHMENT, who share this split CD with the French horde, by no means can compete with 7TH NEMESIS. Even though they also perform a very brutal form of Death Metal (with extremely low grunted vocals though), they still sound very immature in their writing, which is kinda strange as they have already played out live very often since late 1999. But maybe this has something to do with their constant line-up changes, who knows… It’s just that their six tracks on this split release here are still pretty much lack the musical finesse and excitement and basically come across very simple structured. Nothing wrong with that and the band certainly is not bad at all, but in direct comparison with such a skilled bunch as 7TH NEMESIS they only can loose here. For all further info check out the following URLs: 7TH NEMESIS – www.7thnemesis.fr.st, PUNISHMENT – www.punishment.at, SKULL FUCKED PRODUCTIONS – http://skullfuckedprod.free.fr