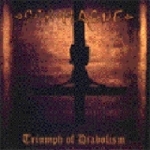 Two years after the their second demo 9th Plague return with a new CD-R titled “Triumph Of Diabolism”. As to be expected, the band did not move one inch away from their way of satanic Death Metal with strong references to MORBID ANGEL during their first three albums. I would say that on this demo here, the band leans more to the “Covenant” era; the guitarsound is similarly downtuned and somewhat washy. I must say that contrary to my colleague Stefan’s opinion I have no problem with the vocals here, they come across as a mixture of Dolan’s slightly guttural snarl and Vincent’s deep tone, some screamed / ranted parts appear in the second song ‘The God Of Ekron Resurrected’ as well. The musical foundation is, as already mentioned, powerful mainly fast dark satanic US Death Metal in the vein of older MORBID ANGEL and maybe INCANTATION as well here and there. The way the band uses breaks sometimes hints a bit at more recent Death Metal like HATE ETERNAL or NILE but the riffing itself remains pure, so to say. The mixing could have been better, as well as the bass drum sound but considering this is the band’s first effort of producing this is rather irrelevant as the material is good, anyway. Available for 20 SEK / 4 € (Europe) / 5$ (world). The CD-R comes in a printed cover like many promo CDs. Links: www.9thplague.com, www.myspace.com/9thplague. Contact the band via c/o Tony Richter, PO Box 9048, S-250 09 Helsingborg, Sweden.