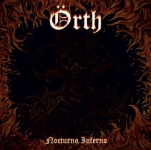 This is an album that was recorded way back in 1996 of the Norwegian band ÖRTH which is in essence the band ARVAS, although the name change was due to the death of Grim (who also played with IMMORTAL and GORGOROTH to name a few). So, it seems the remaining band members decided it was time to exhume this corpse and bring part of it to life… even by 1996 standards this is just your average Black Metal to be expected from Norway: grimly produced (at the legendary Grieghallen Studios) with grim icy melodies, hardly distortion on the thin sounding guitars, and classical high pitched shrieks of pain. The qualities of a demo recording band to put it simply. And even with all these limitations, it is quite enjoyable, if one knows the origins of this. Also by that time and more so now, you will not find anything outstanding or different from what bands like IMMORTAL, EMPEROR or ENSLAVED (all in their early incarnations) were doing. Most songs tend to sound very similar and lack the riffs that the other aforementioned bands were able to conjure in some songs at that time, yet the spirit is there. I must mention that track 8 has a very Death Metallic touch, even the vocals were more in that direction, and for these ears it is some of the best this re-release has to offer, sounding a bit like AETERNUS (no wonder as the bass player is none other than Ares from that band and probably he also did the vocals in this song). While not an stellar release, it is well above an historical document of the Norwegian Black Metal sound, and quite good after all this years. trollskmetall@gmail.com