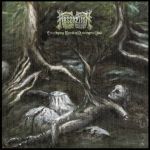 ABSORPTION is a two piece from Moscow, Russia. “Enveloping Womb Of Astringent Void” is their first full length released on Talheim Records. We have an interesting album on our hands, the sound is the collusion of the spirit of Death Metal with the atmosphere of Black Metal. Even though the band is listed as a Death Metal band, ABSORPTION adds in a fair variety of Black Metal in their drumming and their songwriting that is evident. The vocals sound like garbled satellite signals from the Sputnik era, whilst the riffs are dissonant, melodic and aggressive. The band takes you onto a sonic journey sometimes with a traditional rhythm like the end of track # 1, where we suddenly hear a psych section which leads to a bombardment of sonic waves. Track # 2, ‘Dismal Disappearance’ is where the band is in top gear, it actually feels like the band is driving a tank across enemy territory with just one motive in mind! They want to bring about utter destruction with no regard to their personal safety and it shows in the music. I quite like the sound and the pacing of the tracks, most of the tracks jump around sections, providing the listener some relief and immediately immersing the listener into a dark deep pit of relentless attack. As the band does this, they add to their delivery an efficient and charming melodic touch (Track # 3, ‘Mental Secretion’ is a prime example!) from time to time, which elevates the sound further. If you are a fan of Death Metal, check out ABSORPTION, their mass of garbled sonic attack will interest you. For more information, please visit www.facebook.com/absorptiondeath, www.talheim-records.at