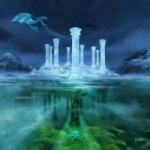 If a band returns after several years of silence the expectations are more than great mixed with the slightly risk that you don’t get what you expect (for example the latest JUDAS PRIEST release). If a cult act like ABSU returns from the hall of the dead a whole underground scene is holding their breath for at least a second. The American Celtic Thrash warriors are part of any essential Metal collection ever since their Osmose Production debut “Barathrum V.I.T.R.I.O.L.” and songs like ‘Highland Tyrant Attack’ from their third attack “The Third Storm Of Cythraul” are more than just great skull crushing Metal music. A lot of time had passed since their last album “Tara” (2001) , the line-up changed several times mainly on the guitars and also a new dedicated record company was found in Candlelight Records. But the most important fact hadn’t changed – ABSU are still playing aggressive fucking Metal with their unique influences which are concentrating this time more on the dark Sumerian cosmos than their Celtic roots. As usual the album is full of unusual arrangements and the ear needs quite some time to “adjust” to the release but ABSU are still in the position to follow their unique way which is again the mixture of Thrash / Black Metal spiced by some epic elements. If BATHORY hadn’t used “The Return” for their 1985 release there would be no better album title for this one – and even if my colleagues praise as “album of the year” seems a little bit exaggerated – this album is definitely worth the resurrection of this American metal institution. www.candlelightrecords.co.uk, www.absu.us