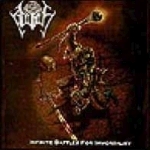 Although some might know that I’m doing the Ancient Spirit Terror zine with Vasili, a friend of mine from Dortmund, I try my best to be objective on this one, since he is solely responsible for this release and thus it is easy to review it as impartial as any other release. It is the second Ancient Spirit Terror tape release and features the first demo "Infinite Battles For Immortality" by Texas-based Black Metal act ADUMUS recorded in 1999. Beside INFERNAL DOMINION those guys are the second band that rose from the ashes of the mighty IMPRECATION who released one album on Repulse Records in the late 90s. Whereas INFERNAL DOMINION headed for the blasphemous Brutal Death Metal department, ADUMUS chose to perform Black Metal comparable to ABSU and EMPEROR. The vicious five-piece manages to combine very dark keyboard sounds with highly aggressive Black Metal, almost Death Metal-like blasting drums, possessed vocals and even on their debut demo they succeed in summoning capturing sinister atmospheres. Whereas the first Ancient Spirit Terror release (ABAZAGORATH demo re-release) was ok, ADUMUS first assault is really great, the sound is raw yet provides enough transparency to discover every instrument and allows everyone to indulge in an exceptional fierce drumming. Some might grumble about the keyboards, but to me they did not sound cheesy at all, quite the contrary is true! The moody keyboards serve a rather supportive function, intensify the dark emotions ADUMUS channel in their songs and now and then they are torn to pieces by the sheer violence and hatefulness the band is able to create as well. If you are interested in indivdual sounding Black Metal that blends keyboards with brutality and rawness, you should get this tape or one of the other ADUMUS releases (especially the "Besieged Abominations" MCD). The tape comes with a professionally layouted, digitally copied and thus nice looking "blasphemous" cover sheet and is available for 3 Euro / $ plus 1,44 Euro postage from Vasili Vasilopoulos, P.O. Box 104108, 44041 Dortmund, Germany. I think Black Metal trades and wholesales are also welcomed, but contact Vasili via ancientspiritterror@yahoo.de first.