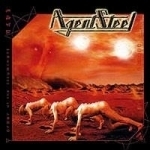 At last here is the new offering from one of the most talented Heavy Metal bands of yesterday and today. I was afraid that the sordid legal dispute involving the new AGENT STEEL with their old singer John Cyriis (this guy is a kind of disturbed genius and he was mostly responsible of the AGENT STEEL demise because of his volatile behaviour) could lead to a new splitting up of the band, or at least to a name change (by the way “Order Of The Illuminati” could have become the new AGENT STEEL monicker, my advice to the band: NEVER consider that option again, because it is a little dull for a band name). The good news is that this new album (after more than a two-years silence following the issue of the very good “Omega Conspiracy” on Candlelight Records) is in fact absolutely remarkable, and confirm the hopes we had after the band’s reformation. AGENT STEEL have the talent to not rely on their glorious past to rather update their songwriting while staying faithful to their roots. The band combine in “Order…” some MAIDEN-esque mannerisms, mixed with fuelled up Thrash / Speed overtones. An epic song like ‘Ten Fists Of Nation’ could have been featured on “Somewhere In Time”, while ‘Forever Black’ is a tribute to the Speed Metal AGENT STEEL played on their “Skeptic Apocalypse” album, but this time with a fleshy production. The pair Juan Garcia / Bernie Versailles offer us a guitar festival in the tradition of Murray / Smith or Tipton / Downing, a true feast for the ears, and they are supported by a killer rhythm section. Singer (I am glad I can use this word instead of “vocalist”) Bruce Hall steals the show on more than one occasion, the man is gifted with a superb voice, some high notes he reaches are delightful, think of a mix between Dickinson and Cyriis, no less. I can even say that he betters up here the already good job he did on “Omega Conspiracy”. The AGENT STEEL musicians totally master the science of contrast, in the end that gives variety to the album, each of the songs stands on its own. I can only advise you to check this superb release without delay, one of the few must-have since the beginning of 2003.