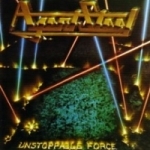 Often compared to AGENT STEEL’s debut album, “Skeptics Apocalypse”, 1987’s “Unstoppable Force” revives some elements present on their debut while engaging in some other stylistic maneuvers that bring down the overall effect of the album. Ultimately, “Unstoppable Force” is not imbued with the sort of timelessness that permeates “Skeptics Apocalypse”. The guitars on this album are recorded with a fuller sound and are to some degree more aggressive than they were on the preceding album. In addition, the drums and bass were brought up in the mix presumably to give the album a “heavier” feel. Yet the result is simply a more polished studio sound that fans of their earlier work may find unappealing. The riffs themselves are far less catchy and tend toward the generic. Also, unlike on their first album, the vocals also do not have the same effect of guiding the band through the trajectories of the songs. Moreover, the inclusion of frequently used backing vocals causes “Unstoppable Force” to veer heavily toward crossover territory. Considering the recent resurgence in popularity of the “fun” Thrash / Crossover style, this sound might appeal to many who dwell in that territory. This style has never particularly appealed to this reviewer, however. Clearly, AGENT STEEL were trying to expand their approach with this album, and it’s difficult to fault a band for attempting to move forward. When a band has already established a respectable and solid formula, however, one wonders why they would choose to deviate from it. Still, “Unstoppable Force” is not a bad album and will appeal to most who enjoy thrashing Power Metal, but it is ultimately less successful and has been treated more harshly by the test of time that their first album. This CD reissue also contains three of the tracks from the “Mad Locust Rising” EP that was released between AGENT STEEL’s first album and this one. Note that the other track from that EP is featured as a bonus track on the CD reissue of “Skeptics Apocalypse”. This seems to be an unfortunate choice of bonus tracks calculated to force fans to buy both reissues to get the entirety of the EP material (just like the “Skeptics…” re-issue also this one got remastered and gets delivered in a digipak with an embossed goldprint logo, while the 12 page booklet offers a completely new layout, all lyrics and old photos – Frank). www.centurymedia.com.