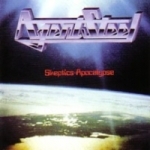 Most who read this review will already have at least some idea of what AGENT STEEL sound like. Los Angeles, California’s AGENT STEEL were among the most compelling Power Thrash bands to emerge in the 1980s. Their first album, “Skeptics Apocalypse”, released in 1985, has long been considered a classic and listening to it again today in 2008, it is clear that it has stood the test of time. Musically, AGENT STEEL deliver precise Speed Metal based upon captivating riffs and expert hooks designed to draw the listener into each song. The production is clear, but not polished lending the album a slight rawness that is suggestive of the intensity of the band’s live sound. Indeed, parts of the album sound as if they may have been recorded live in studio due to the cohesiveness of the sound and the execution of the songs. The simplicity of the production is part of what prevents this album from being shelved along with so many other hopelessly dated recordings from this sub-genre and time period and what ultimately contributes to the continued vitality of this album after over 20 years. In their playing and songwriting, AGENT STEEL clearly references IRON MAIDEN, and, although not as well-crafted and effective as IRON MAIDEN, “Skeptics Apocalypse” definitely surpasses much of what was being delivered from the U.S. in 1985. Also, although the IRON MAIDEN comparison has been made since their inception, AGENT STEEL play Speed Metal rather than Heavy Metal and thus tend to be faster and more hostile. It should probably go without saying that the vocals on this album, delivered by John Cyriis, are in the shrill falsetto style associated with most 1980s Power Metal. Anyone who doesn’t have the stomach for this vocal style will probably be incapable of overlooking Cyriis’ vocals here. However, the vocal performance is among the most alluring aspects of the album. Visceral and assertive, Cyriis’ vocals work to accentuate the aggressive thrashing guitars that provide the foundation for the album. In addition to the music, it should be noted that AGENT STEEL focused lyrically on science fiction themes involving aliens and other extraterrestrial matters. This theme would persist throughout their career and is one of the more unique aspects of the band, especially at the time of the release of “Skeptics Apocalypse”. For anyone who doesn’t already own “Skeptics Apocalypse”, this CD reissue is worth obtaining. For completists, this CD version may be worth picking up for the two live bonus tracks ‘Calling 98 For Skeptics’ and ‘The Unexpected’. There is also a studio cover of JUDAS PRIEST’s ‘The Ripper’ taken from AGENT STEEL’s “Mad Locust Rising” EP. The remainder of the tracks from that EP appear as bonus tracks on the “Unstoppable Force” CD reissue. This album contains the finest work by AGENT STEEL which, although not necessarily novel, was certainly competent and contains extremely memorable songs that beckon one’s consistent return to the album (this reissue also has been remastered, comes in a nice digipak with an embossed silverprint logo and features a 12 page booklet with new layout, all lyrics and old photos – Frank). www.centurymedia.com.