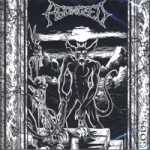 The re-release mania seems to produce strange effects. "Gods…" is the only recording AGONIZED from Lahti in Finland ever did before they broke up and the band members disappeared from the scene. In 1991, "Gods…" was released as a demo tape only. But during the last year, it was already republished twice, first as a CD-R by the band itself and then on a vinyl 7" by Emptiness Productions. Now Aphelion put it out once again as a professionally made CD with a reworked version of the original artwork. And after I read all these information, I asked myself why these recordings were so important to get them re-released this often. Honestly said, these four rather short songs (plus intro and outro) sound pretty outdated today, even though this mix of old Suomi Death like DEMILICH (soundwise), AUTOPSY tempo and very much of the feeling of old CARCASS has a certain special charm. The sound is extremely raw, the vocals are gutted out in best Grindcore tradition and the speed varies from midtempo to slower grooves. Don’t ask for any perfection or even DEMILICH’s musical madness, this was not what AGONIZED intended. But if you like your Death Metal raw and guttural, songs like the title track or the great ‘Long Live The New Flesh’ should deeply satisfy you, especially if you are into the aforementioned bands and love to dig for old gems. You might find one at: www.myspace.com/agonizedfinland or www.aphelionproductions.net

A tiny piece of Finnish underground Death Metal history here… AGONIZED’s 1991 demo "Gods…" for the first time available as a limited run of CD-Rs (140 copies only). The ones who can still remember this Finnish 5-piece grinding Death Metal act, obviously put them to the same cauldron where some AIDS-ridden blood and guts were boiled for such names as XYSMA, DISGRACE and DEMILICH back in the day; especially in the unholy name of early times of those 3 aforementioned bands in particular. AGONIZED’s scheme for churning the most guttural and gut-wrenching, muddiest grinding Death Metal was basically the same as their fellow ‘big brothers of grind, gore and death. And whatnot, the "Gods…" demo has quite a lot of that magical nostalgic value and potential in it that may even lead you to purchase this product. As a matter of speaking, chances are relatively high for that. Yes, I know, it’s just a CD-R but so what – who really cares. The band’s 6-track offering (well, 4 tracks precisely, with an intro + outro) does have some unexplained charm to it, even if I would never claim this demo would achieve a status as some ultimate classic or anything. However, it’s still something collectible for true underground Metal suckers for sure nonetheless. And don’t worry if you miss this exclusive opportunity to purchase this CD-R format for yourself; this will be released as a 7" EP as well as far as I am informed. Act quick – or prepare for crying a river later, U worthless crybaby! To obtain a copy of this little Finnish underground gem for yourself (if it’s still available?), go to: www.deathmetal.org/news/agonized-gods-demo-cd-r-available