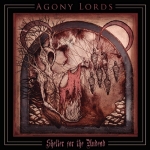 AGONY LORDS
A Shelter For The Undead
(Concreto Records)
43:11min

Formed way back in 1989 under the name RIPPING FLESH, they have been through very few line-up changes, and besides the new name, their style has evolved. Their Death Metal roots are still there, but with the always present traditional Heavy Metal and Speed / Thrash Metal sounds. This is their 4th album in their career of more than 30 years, and it is still as strong as ever. Their sound nowadays is something that reminds of ENTOMBED with touches of early METALLICA and more than once nod to MERCYFUL FATE… you get the idea. More than once they have been compared to what nowadays DECEASED is playing and that is not far away from the truth. I think both bands (that I have seen live) share the same passion for the same kind of bands. Lord Brave, the vocalist and producer, is also a well known studio engineer and thus the sound of this album is awesome. Guitar player Mau Baramí shows himself as a very respected guitar master (he actually is a music teacher) whilst new guitar player Joel Silva injects the strength only youth can give. And for this album the rhythm section that was with the band 30 years ago is back, with Hector on bass and drummer extraordinarie Oscar (a guy that was actually offered to go drumming with a respectable Florida Death Metal band many years ago!) show what years of playing can do. The guitar sound is so great that many bands should notice. They do not have to be very brutal to sound heavy or mystic. A mention must be done to what the band has been doing for the lyrics since the last album, this is a horror themed album. The musical execution is just amazing, and the composition is creative, melodic, dark, yet never sounding soft. This is the kind of band that between all the senseless brutality (which sometimes is also good) can show that some finesse is more than welcome in the darkest paths. Compared to their last album (which in my book is among the best Metal released in Mexico) this one is a bit faster, a bit less epic, yet it retains all the elements that makes an album memorable. Fans of later era DEATH, Taneli era SENTENCED or “Clouds” era TIAMAT will surely love this. Any other self respected Metaller looking for darker paths with more finesse, the spirit awaits here too. www.facebook.com/agony.lords, www.concretorecs.com