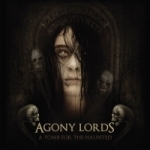 AGONY LORDS
A Tomb For The Haunted
(Chaos Records)
45:49min

I have been listening to Heavy Metal music in all of its incarnations since well over 30 years now… I have seen fashions come and go… bands having ups and downs… but very few times, I have witnessed bands that are reborn from their ashes… I know this band since 1988 when they were known as RIPPING FLESH… I have seen them going on through all the things a band can go for over 20 years… and no matter how close I was with them, I really had lost hope for them… I accepted it as a natural thing… so, when I listened to this album for the first time, I was in total awe… this is resurrection… this is redemption… this is revenge from the grave… I just cannot comprehend how it was possible… so I will not dwell further into explaining what does not need to be explained… I can stop here and proclaim that “A Tomb For The Haunted” is probably the best Mexican Metal album of all time, and one of the best releases of 2012… but then again, I will dwell a bit deeper to explain why… first the approach of the band in the lyrical aspect now touches a whole horror story and essence… pretty much the way KING DIAMOND does in “Them”… I already gave a hint of what might be the biggest influence musically for this album… the deep cavernous vocals of Lord Brave gave the band that Death Metal approach, but he is not afraid to give at time a quasi-melodic approach which at times recalls SENTENCED´s Taneli Jarva from the “Amok” era in a more low pitched form… a song like ‘Emily’ sounds like a more modern version of what VENOM did on albums like “At War With Satan”… it is impressive the way most guitar riffs have so many hooks that it is almost impossible not to be unconsciously humming some riffs here and there, and the guitar player is without a doubt up there with the best you can recall… and instead of following some aging trend of playing slower, the band is not afraid to play fast to add variety to the songs like the thrasher ‘The Phantom Book’ which reminds me to KREATOR “Extreme Aggression” style…besides Lord Brave the only other original member is drummer Oscar , who also plays in many other bands like NECROCCULTUS, and gives here a fantastic performance… a mention must go to the production done by Lord Brave which sounds massive… again, probably the best record ever recorded in Mexico for what Metal means… there are two interludes that flow perfectly with the story being told… and as it as not enough the album closes with the massive 11 minute epic song that gives title to the albums, in which the band shows they can also play in a doomed tempo much like CANDLEMASS does in their prime… the overall aura of the album, while it is melodic, it does sound doomed and haunted… few bands are able to conjure a similar vibe… DENIAL OF GOD, MORTUARY DRAPE and DECEASED come to mind… they all share similar connections, as obscure traditional Heavy Metal, horror and perdition… if the riff at around 4:40 in this last closing song that gives title to the album does not make you to headbang and make a devil horn, then you are not a Metal fan… add to all this the fantastic presentation in a digipak edition, that comes with an attached booklet with all the lyrics and explanation of the events described in this concept album, as well as additional art that goes along perfect with the music… and for those looking for more there is a special edition which contains an extra song (a great W.A.S.P. cover!) and an additional DVD with videos, many pictures form the beginning of the band, and a couple of great pro-videos (check out the names appearing at the graves for the video ‘Spirit In The Tower’)! At this point you a re reading too much. I therefore use the power invested in me of all these years of dwelling into Metal to command: get this at any price… yes, even for that of your soul. More info at: www.agonylords.com, www.facebook.com/pages/agony-lords-official/159037610808405, www.chaos-records.com