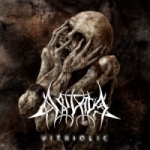 Within the last couple of years there hadn’t been a lot of real Black / Death Metal releases which deserved the title classic (only the ZONARIA debut must be mentioned) maybe due to the unsuccessful resurrection of DISSECTION or the rise of the Pagan cult. After 14 years of existence the German band AKRIVAL is finally releasing their debut via Pictonian Records and even if their 9 tracks can be roughly summarised as Death / Black Metal is their approach nevertheless totally different. The four band members are real maniacs on their instruments and you can hear a decade of weekly practice means the album is a tough ride an all instruments but what is missing are real emotions. The songs are fast, brutal and aggressive but everything seems too much composed / structured. AKRIVAL took some musical idols from the Swedish Black / Death Metal cult but there are much stronger influences from the ultra technical approach of the American Death Metal scene. The album is like a loaded gun and the bullet is also leaving the barrel but I can’t hear a shoot, no song has any kind of hit potential and even after a fourth listening session I can’t differ any song. Think that "Vitriolic" is an album for all fans of technical Death Metal but if it comes to Death Metal with or without Black Metal touch I prefer the more direct combat tactics of band like LORD BELIAL, FLESHCRAWL or even DAWN. http://pictonian.records.free.fr