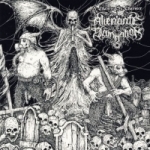 ALIENANTE DAMNATION is a new band from Belgium; “Le Chantre Du Charnier” their first official recording. To my knowledge there isn’t a widely available demo around, though that doesn’t necessarily mean one does not exist. At any rate, a first glance at this album, and you might receive a mixed message, I did. The mixed message comes in the logo and artwork, which I think, considering how much the logo looks like a Dark Adversary Productions (that’s the DROWNING THE LIGHT label for those of you who weren’t familiar) band, the gas-mask clad goats and flute-playing angel of death tell a different story. No, this is absolutely not icy, thin, panda bears in the northern polar icecaps bedroom Black Metal – not at all. This is, in fact, quite the ripper of an album. I don’t remember enough high school French to translate the song titles, but there are 14, some with sentences for titles. It doesn’t matter which language, any song that has a speech for a name might need to shuffle back to the drawing board for some rethinking. However, all of that aside this is a blistering album with decent riffs and some MARDUK-style blasting. Fans of FUNERAL MIST and similarly styled bands will get a kick out of this album as well. Because the album is sung in French, I’m reminded of DARVULIA, one of France’s best Black Metal bands. I’m sure DARVULIA fans will appreciate this, too. Good, solid, blistering Black Metal is what you get here. More info at: www.facebook.com/alienantedamnation, www.everyoneweb.fr/arsfunebris