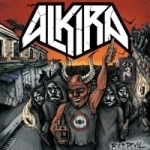 Australian Thrash Metal act ALKIRA was formed in early 2010, and having already 2 EPs out and available for curious parties; "Down From The Hills" released in 2012 and the band’s most recent 4-track EP, titled "Red Devil", ALKIRA have slowly but securely started making some names for themselves, especially on their home ground Australia. It needs to be said that ALKIRA have truly managed to show their horns on this band’s most recent output pretty well. Shortly, these Aussies play something along the lines that I’d call ‘groovy Thrash Metal’, having a twist of both old school and modern Thrash incorporated into their sound. In a way they remind me of "Chaos A.D." times SEPULTURA, added with bands like PRO-PAIN’s or CRO-MAGS’ sweat-oozing masculine attitude – and a breath of Bay Area Thrash sound. If that’s something that you may find appealing, then ALKIRA is right up your alley. I gotta believe we’ll surely hear much more about this grooving Aussie Thrash Metal band in the near future; it’s just up to them really to keep their flags high in the air to get noticed even more around the globe. For knowing more about them, you probably may want to go to www.facebook.com/alkirametal