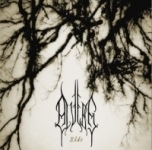 “Pounding Norwegian Black Metal” are the words readable on the info sheet from Dutch Soulseller Records describing ALVERG’s music and their debut album “Elde”. I can agree on the term “Norwegian” as the origin of this band is more than clear, but I have my “problems” with the word “pounding” as I would use this word describing a high speed Black or Death Metal band and ALVERG are mostly in slow and midtempo regions. Anyway, we don’t want to be some kind of penny pincher here or whatever, so forget it. I have to admit that I lost track a little bit through the last years when talking about Norwegian Black Metal and the whole Black Metal scene in general, the influences and therefore the connections I hear while listening to this record are probably not up to date anymore, though I always think it’s better to compare a band with one of the first bands of this genre than to current trendsetters. A band I clearly figure out in ALVERG’s sound are Norwegian GEHENNA and I can tell you I see their “First Spell” MCD as one of the best releases in this genre. Because of this (for me) connection I listened to this almost one hour lasting 9 song CD with pleasure. It can’t beat the “First Spell” recording and I don’t expect that at all but discovering that there’s a band writing music in this vein in 2009 makes me think that I should open my eyes for Black Metal again a little bit more than I currently do. “Elde” is a very good recording with the typical not-perfect but necessary sound and 9 cool tunes. The whole recording get’s better with each song and sees a great final with the last two songs ‘Svarthammeren’ and ‘Towards The Kingdom Of Alverg’. I enjoyed this CD a lot and therefore can recommend this recording to each fan of midtempo Norwegian Black Metal or probably to those old school morons like me to make them recognize again that the current Black Metal scene has more to offer than you see while reading the bigger Metal magazines. Available from www.soulsellerrecords.com