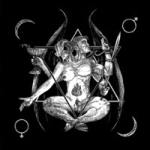 Molester Kadotus is not only the owner of his independent Black Metal, sort of "kvlt" label Hammer Of Hate but also the sick mastermind behind this unholy Finnish Black Metal force known better as ANAL BLASPHEMY. Helping hands are provided by Kryth (from PURE EVIL) on drums and backing vocals and Possessed Demoness (from ANGUISHED) on vocals (for a song ‘Lust For Satan’) on the band’s 3rd full-length studio album in order, "Perversions Of Satan". The album features 8 tracks all in all that are all little yet very vicious epitomes of pure evilness – filled with 100% dedication for crushing all holy and making profanity at maximum. You say you like what they represent both music- and ideology-wise? Sure thing… impure, filthy and disgusting are just a few synonyms for ANAL BLASPHEMY’s raw and penetrative Black Metal attacks on "Perversions Of Satan". Without questioning the band’s principles to spread the darkness and havoc everywhere by their relatively simple, menacing and straightforward Black Metal, there’s incredibly lotsa unexplained charm to their stuff. Simplicity is the main keyword on this opus – and I can already see the fans of early BEHERIT, BLASPHEMY and intense wankers of BATHORY’s first couple of albums, reaching their dirty hands toward "Perversions Of Satan". The war has been declared and the feast is on… Band website: www.anal-blasphemy.cjb.net, label: www.hammer-of-hate.com