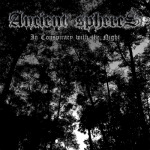 ANCIENT SPHERES from Costa Rica take their name from an archaeological mystery in their home country; the notorious, massive, nearly perfectly spherical boulders whose function remains unknown. The band’s connection to the night, the forest, the ambiance of their country seems apparent from the start, both in the rather simplistic cover artwork and in the opening intro, which effectively invokes a nocturnal tribal wilderness. This leads into an assault of primitive and raw yet melodic Black Metal heavily attached to the early 90s scene. There is something Scandinavian in their sound, with the EMPEROR demo and old MAYHEM sometimes coming to mind. However, I also often found passages heavily reminiscent of the Greek scene, mainly VARATHRON and the likes. So you see how deeply rooted in those pristine times this band plays its music. You are in for a long treat, as the album tops 70 minutes, with the inclusion of four remastered and otherwise altered bonus tracks. The recording quality is also much akin to the scene they draw inspiration from, and everything can be heard clearly: the raspy Black Metal vocals, the thundering bass and the one guitar, that despite not being backed up by a second one fills the long songs with proficiency, aiming for rich compositions and strong riffs. The obviously programmed drums could be heavier, but that does not hurt the result very much. The album is successful in keeping a high level of quality throughout its entirety, and I find much to praise in the result, with its rich, inventive guitar playing so far ahead of the unsophisticated sound of less ancient Black Metal. If you are into the original second wave Black bands, this is certainly worth a listen. Latin America keeps delivering quality old school Metal. Look for more info at www.facebook.com/ancientspheresofficial, www.satanath.com, www.morehate.com