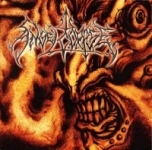 Usually I find compilations pretty useless and boring as they mostly feature wellknown material of a certain band, enriched with a couple of rare / unreleased tunes so that the label can still cash in on all the die hard fans anyway. But in this case it’s fortunately quite different. "Iron, Blood & Blasphemy" combines all ANGELCORPSE recordings that have been made prior or additionally to their three killer full length albums, which means you get both their 7" EP’s, all of their cover songs, their classic demo and some additional live songs. But let’s go a little bit more in detail here. The album kicks off with the two bonus tracks from the re-release of their farewell album "The Inexorable", namely ‘When Abyss Winds Return’ and the SARCOFAGO cover ‘Desecration Of Virgin’. Next up are the three very well executed cover songs ‘Demon Seed’ (originally to be found on the MORBID ANGEL tribute album "Scream Forth Blasphemy"), ‘Kill Again’ (from the SLAYER tribute "Gateway To Hell Vol.2") and ‘Eat Me Alive’ (from the JUDAS PRIEST tribute "Hell Bent For Metal"). The "Wolflust" 7" with its titletrack and the POSSESSED cover ‘Burning In Hell’ is next, followed by ripping versions of ‘Pleasure To Kill’ (from the KREATOR tribute) and ‘Genghis Khan’ (from the IRON MAIDEN tribute "A Call To Irons Vol.1"). An unreleased live track from their European tour in 1998 (‘Reap The Whirlwind’), the "Nuclear Hell" EP (which features live versions of ‘Envenomed’ and ‘Sodomy Curse’) and the four songs off their "Goats To Azazael" demo complete the picture. I’m not sure if there’s gonna be an additional, limited edition version of this album (with one extra song) or if the label info that 18 tracks will be featured simply was a mistake. Fact is, that the promo that I got only has the above mentioned 17 tracks. But that’s already value for money to me! ANGELCORPSE fans and everyone else into rawest, highly aggressive Death Metal definitely have to pick this up immediately!!!