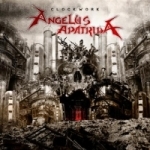 I was really impressed with the Spanish Thrashers ANGELUS APATRIDA’s first two albums. But, WOW! Their latest offering, “Clockwork” shows the logical evolution of the band. Their current line-up, brother’s Jose and Guillermo Izquierdo (bass and vocals / guitar respectively), David Garcia on lead guitar and Victor Valera on drums, has crafted a heavy as hell Thrash Metal album. Their style just cuts across with some furious music and great headbanging moments. The opener ‘Blast Off’ just takes off (pun intended) from here on with an aggressive, fast paced attack full of tasty riffs. Check out the songs ‘Legally Brainwashed’ or ‘Clockwork’ for a couple lessons in Thrash Metal or the old SEPULTURA riffs in ‘My Insanity’. I can also hear an overall old NEVERMORE influence. But don’t get me wrong, they are not ripping off any of these bands and that is as modern as they get. The riffs rage non-stop and the album never lets down. Guillermo’s vocals are great. He can go from a frantic shriek to an aggressive grunt to a melodic scream and everything in between. Top musicianship adds a twist to the songs’ interesting structure and composition, with some flashing traded guitar leads, a crisp bass guitar work and ultra-tight drumming. Production-wise, “Clockwork” flows naturally and balanced, letting all the instruments come through the mix. And just when you think it couldn’t get better, they threw in a ‘Thrash Metal’ cover version of IRON MAIDEN’s ‘Be Quick Or Be Dead’. Go pick this one up ASAP! Contacts: www.angelusapatrida.com, www.myspace.com/angelusapatrida, www.centurymedia.com