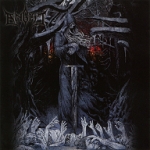 This is a release that has been out in the sun for a couple of years, though as the band has signed the dotted line with Abyss Records and soon should be ready with their first full length release, a little noise before that could be useful. That is quite alright, as I seem to have overlooked the release of "Circle Of Suffering" back in 2011, which is quite a shame as the five tracks on the release are to my liking. The band hails from Iceland and delivers Death Metal like we expected it to sound in the good old days, to simplify it; we could say ANGIST is a good mix of INCANTATION and DISSECTION, which could sound like a strange mix, if not done right. Though the two girls and two guys are doing it alright! We have the crushing darkness and world-consuming heavy atmosphere from INCANTATION, and sometimes even the same thundering mid-paced crushing, both drum- and guitarwise, and Edda the growler, do once in a while sound like Craig Pillard, though never as guttural and outright evil, I don’t think anyone ever will reach his standards, though she does also here and there resemble Jon Nödtveidt. And when we are at DISSECTION, ANGIST weaves cold, magic and beautiful melodic lines into the music, so we end up with a good mix of utterly brutal and crushing Death Metal with a healthy touch of the Swedish melodic Black / Death Metal mayhem we all loved it in the early and mid-nineties. A good blend of dark and cold atmospheres that suck in the listener and pummeling brutally executed pieces that tramples over the headbanging masses, some great guitars and a fierce and brutal vocal assault with some great features and good variations into the barren plains of Black Metal shrieks. A well executed crossover that leaves me looking forward to the coming album, as the relentless brutality, well crafted melodies and dark and crushing atmosphere on this release is just what I like to ‘bang my head to. Enter the blissful bloodshower: www.facebook.com/angisttheband, http://angisttheband.bandcamp.com