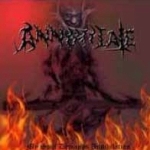 I already wrote a review about ANNIHILATE’s latest release "Forgotten Rites" from 2009 and they asked me to review their first demo "My Soul Demands Annihilation" from 2006, too. For sure I will write that review though talking about a recording which is already 4 years old isn’t that objective anymore. Nevertheless as the guys from ANNIHILATE told me that they are currently rehearsing their new songs for an upcoming demo / CD I think this review won’t be the last one about a recording from this Peruvian hopefuls. To start with, "My Soul Demands Annihilation" is a good demo with a few flaws. The sound itself could be a lot better and the demo itself sounds more like a rehearsal demo. That’s basically the major problem as the music behind sounds good, well played and with a lot of good ideas. Unfortunately the sound destroys many of the good moments. I really would prefer to listen to the songs in a proper sound quality as ‘Moans’ and especially ‘Poseso Y Maldito’ truly have great moments. ANNIHILATE’s style reminds me a lot on older gods as POSSESSED and a little on MORBID ANGEL not to forget old SEPULTURA here and there. From my point of view ANNIHILATE is a band worth to watch out for and I’m sure their next release, if produced well, will show us the real quality behind this band. Check out www.myspace.com/annihilateband and contact them if you are interested.