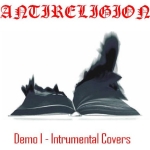 I have always been a fan of demos, ever since I bought my first demo many many ages ago (I must be getting old, damn). I have always liked to follow a band from the beginning to a defined sound, and often finding the demos the most interesting parts of a band’s history, as that is where the ‘real’ sound is shown, the raw, intense and brutal delivery, which sometimes are honed away in the hands of a good producer or by a record label that would like a specific sound. Though enough rambling and let’s get to this demo, the first demo from the Brazilian one man army ANTIRELIGION. "Demo I – Instrumental Covers", which is, if you haven’t guessed it, a demo consisting entirely of instrumental covers. One way could have been taking tracks with vocals and made them instrumental, though not here, ANTIRELIGION has been hunting down an intro and four instrumental tracks to cover, more or less as they were, in a tad more simplistic and raw form. First we get a bit BURZUM worship with ‘The Crying Orc’, ‘Naar Himlen Klarner’ and ‘Dominus Sathanas’, which are delivered as should, though without the haunting and mysterious atmosphere Varg put into his music back then, in the early nineties. Then we’re off to ‘Metal Storm’ by the mighty SLAYER, very simplistic and without the trademark SLAYER punch, and one kind of expect ‘Face The Slayer’ to continue after the last cymbal is hit. From Black Metal to Thrash to even more Thrash, ‘Thrash Attack’ by DESTRUCTION, which is the last track on this demo, again very simplistic and raw, and the guitar really needs some punch into the riffing, and the drumming is quite hollow, though if that is the sound of ANTIRELIGION, that is how it might should be. I’m not really sure I get this demo. As a start and a way to get into riffing and setting up structures, working one riff into another, one drumpattern into another, it is a great exercise to do instrumental covers. Though I can’t really see the idea in releasing it as a offical demo, as there isn’t any original material to judge the band by, and that’s a quite essential thing when hearing a band’s first release, compared to a bunch of cover versions, not done that well. Inn i slottet fra droemmen: https://antireligion.bandcamp.com, antireligioncontact@gmail.com