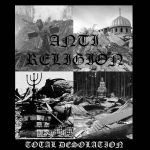 Lost in thoughts I am looking at the snow falling, listening to ANTIRELIGION’s third or fifth or first song and don’t feel anything. It seems like the total desolation what he (cause its a one man band) has to offer. A record as feeble and weary as a round of scrabble with Donald Trump. Whereby I guess, here I can at least learn something about the needs of having an idol besides oneself. And ANTIRELIGION has one. Going out on a limb I would say it’s BURZUM. Besides he dedicated, with three of five songs, nearly his whole “Demo I – Instrumental Covers” to the high count of modern age philosophy himself. ANTIRELIGION also is one of the guys who believes with the shittiest recording settings, you reach the most essential truth of how Black Metal should manifest itself. Undoubtedly did “Varg Vikernes” manage to record some of Black Metal’s most outstanding records. With apparently the lowest quality of equipment. Guess there is no discussion. But first of all he is (besides those mental issues) a talented musician. Second he knew how to create a sound which seems to be shitty recorded but actually isn’t. And third it fitted to his atmosphere. ANTIRELIGION doesn’t have these abilities. Thus we have one more of THESE bands. One man Kasperletheater with a simple, or let’s call it incredibly stale message. It’s about unholy wars, the fact that death is the only truth, some sacrifices and his urge to destroy “The Books of Lies”. However I don’t want to be unfair. I admit he has some acceptable ideas. Quite ok riffs and breaks. But the only real good thing about it, is his voice. Reminding me a bit of BLACK MAGIC SS and their psychedelic style. And that’s about it. Open the gates to hell or check: https://antireligion.bandcamp.com