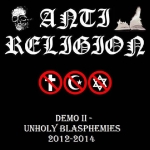 The second demo from Brazilian ANTIRELIGION has now emerged. An intro and four new tracks thrown our way. If you just have read my review of the first demo from this one man Black Metal band, you read my agony over no original material, that has now emerged on this demo. Though first we start off with a cover of an intro, this time the mighty CELTIC FROST have been under the (hell)hammer and we get a quite stripped down version of ‘Innocence And Wrath’, and I blank have to admit I like the original orchestral version somewhat better than this, as it lacks the depth, grandour and mysteriousness of the original. Next up are two covers. First we get MAYHEM’s ‘Chainsaw Gutsfuck’ and then straight to ‘Tol Cormpt Norz Norz Norz…’ and ‘In The Name Of Satan’ from IMPALED NAZARENE. Two quite intense and in your face tracks. The MAYHEM cover is pulled off quite good, and is one of the better versions I have heard of that classic, ‘In The Name Of Satan’ lacks some of the ferociousness only IMPALED NAZARENE can invoke in a track, so that quite fades, but is delivered damn brutal. Then we get to two original ANTIRELIGION tracks ‘No Heaven / No Hell’ and ‘Bewitched And Forgotten’, which displays raw and in your face Black Metal from the dark past. With quite a heavy feel of VON to it and early BEHERIT, simplistic guitar riffs, the same goes for the drumpatterns and then we have the heavily reverbed vocals. This is far from the best Metal I’ve heard in this category, though this demo is quite a step up form the first. One we have some original music, a far better sound on the instruments and some intensity and energy, though I don’t really totally feel it yet, but big props for the MAYHEM cover, that has some of the right feel and energy! Enter the circle of the tyrants: https://antireligion.bandcamp.com, antireligioncontact@gmail.com