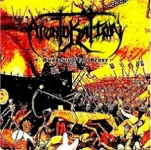 "Awakening The Beast" is the debut demo from the Spanish band APONTOKATION. Released in 2011, 2 years after the formation of the band. Upon first listen, I was taken to the mid 90s. Maybe due to the production. Overall I think it is a little thin for Death Metal, but it resembles that era perfectly. The guitar tone is more on the treble side, the drums stand out with a little too much compression and the bass guitar drives the bottom end very well. Execution wise, the band shows good musicianship and they deliver the goods as expected. I think they need to focus on the vocal department though. Vera has a weird tone. His vocals stand in a mid range, that it’s not deep nor guttural. And the high pitched backing vocals in some phrases take them up there even more. Now onto the music itself. APONTOKATION plays Death Metal. Being their first output as a band, it is understandable that they don’t come up straight in terms of identity. They use a lot of Thrash Metal into their music, with some blast beats here and here to add variety. I found good headbanging parts and some memorable riffs. But, as stated before, you can hear that they put out one too many rhythm parts and some of them don’t have the pounding heaviness of, let’s say, "Traditional" Metal. In my humble opinion, "Awakening The Beast" is a good Death / Thrash demo. If they manage to come up with longer songs (6 out of 7 songs don’t hit the 3 minute mark) as a way to develop their style and they can come up with deeper or better vocals, APONTOKATION can make it though the endless number of bands that dwell into this style. By the way, the closer ‘Buried Alive’ is one hell of a song! You can contact the band here: www.facebook.com/pages/apontokation/180125972031603