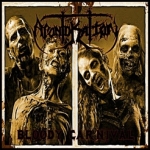 APONTOKATION’s second demo from 2013 is a short affair into Death Metal. Included are 2 songs plus an intro. And this time, 2 years after their debut demo from 2011, "Awakening The Beast", it shows that the Spanish guys had time to develop their style and put a lot more aggression and effort into their music. First off, the production is heavy. The guitar tone is really thick and that adds a lot to the atmosphere. The bass guitar is more present and the drums have a beefy, natural sound. Finally, the mix is pretty good, even though I think the drums are a little thrown back in certain parts and the vocals are too "out there" in other sections. The band kept some of the Death / Thrash influences they showed in their debut demo. But "Bloody Carnival" is good old Death Metal, sans the ultra-technical and manic approach of one too many bands out there. Overall, these 2 songs sound deeper and more focused! There is a really catchy SEPULTURA influenced riff at 3:26 in the opener ‘Bloody Carnival’ which fits the song perfectly. And the first part of ‘M.O.S.H.’ has another great riff which reminded me of early MALEVOLENT CREATION. One of the main downsides of their previous effort, the vocals, have been taken care of. They sound way better and get along very well with the music. APONTOKATION keeps things varied and both songs work well in terms of rhythm and speed. If the band keeps working and developing like they did in these 2 years, they are well worth your attention and support. Contact them via their Facebook site here: www.facebook.com/pages/apontokation/180125972031603