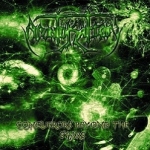 After more than 30 years of extreme Metal this does not happen very often. A band name not used before and not referring to some ancient myths or other specialist fields. If you google the word APONTOKATION there are 235 different sites and as far as I overviewed they all deal with the Death Metal outfit from Spain. By the way, 235 sites having reviews, interviews or concert announcements for an undergrounded Death Metal band? Sometime I think every Metalhead with a little bit of spare time and the ability to write two sentences accident-free is running an own blog. This must be the modern times everyone is talking about. But back to the self-financed debut "Conquerors Beyond The Stars". As unique the band name may be, the music is not. The band is traveling the well-known paths of Death / Thrash Metal, which always make me think about whether it is Death Metal influenced Thrash Metal or vice versa. May the nerds and weisenheimer decide. The Death Metal songs on this album are heavily influenced by the mighty BOLT THROWER and are a quite good substitution helping pass the waiting time for the next BOLT THROWER album, if there ever will be one. By the way, recently I came across a meme referring to the movie "Interstellar" saying: "Well, one year on this planet is like seven years on earth – let us wait here for the next BOLT THROWER album!". The Thrash Metal parts are in the vein of serious Thrash Metal, which for me means late 1980s KREATOR and SODOM or American bands like TESTAMENT and EXODUS. The sound is more some kind of semi-professional, but fair enough. There is a song by MANOWAR called ‘All Men Play On Ten’ and for "Conquerors Beyond The Stars" you have to turn your speakers up to ten. The one and only thing I do not like, in fact which really stressed me out, are the movie samples. Even with your speakers up to ten they are very silent, more than once I thought my computer crashed because there was no music to hear. But besides that, a very fine Death / Thrash Metal album the way it should be done! www.facebook.com/pages/apontokation/180125972031603