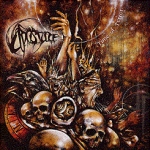 This is probably the first Ukranian Metal band that crossed my path (and being aware of… my mistake). APOSTATE was formed more than twenty years ago and this is only their second full-length. ”Trapped In A Sleep” from 2010 preceded here and before that the band released a demo (”Consign To Oblivion”, 1995), an EP (”A Song Of The Dead Lake”, 1997) and a compilation (”From Consign To Oblivion To A Song Of The Dead Lake”, 2007). ”Time Of Terror” offers five tracks, but still clocks more than fifty minutes. This demands some challenge in each track. The variation can be found in some satanic samples or sudden blasts. In the first track the concept seems like an astronomic voyage with endless monotome passage that express journeys in lightyears. But as soon as the second one starts to bloom, it bogs down in a somber darkness in which no end seems to appear. With these lengths there was a chance to build something majestic (like DESOLATE SHRINE for example), but unfortunately the band fails to succeed because it drags on too long for any dynamics. Partly the production prevents this to happen and partly the music misses the intensity to add some suspense to the dark. The production seems to be off balance and too heavy for my headphones. The instrumentation is just fine with good drumming. The vocals are brutal and reminded of the Sylvian on the KATAKLYSM demos, but without the shreeks and possessed growls. But these elements weren’t enough to make me recommend you this album. Otherwise check yourself on www.facebook.com/apostatedeathdoommetalband or www.ferrrum.com