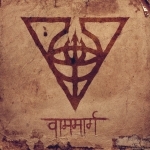 At the risk of repeating myself: the contemporary Black Metal scene has a lot of interesting bands to offer. The German APOTHEOSIS OMEGA from Aachen is the next band that adds their name to the growing list of great bands who play blackened Metal with class. The five guys are around as a band for not even two years and have their first album “Vama Marga” out now on Godeater. Taking into concern that this is a debuting album, “Vama Marga” is already very much on point and pretty distinct. Philosophically, the German lyrics of vocalist Dorn are based on a similar ground as those Jon Nödtveidt wrote, with Sumerian motives and ideas based on the Qabalah as the medium to find the way to the inner self. But we are not only here to discuss philosophy. The music matters here either. And so I can state that the aforementioned Mr. Nödtveidt is also a musical reference, since APOTHEOSIS OMEGA have a related sense for melodies and a similar understanding for musical blackness. But in comparison to DISSECTION, the Germans slow down much more, thus creating epic songs and monolithic moments. Of course this doesn’t mean that APOTHEOSIS OMEGA can be called a black Doom band. But with more epic song structures and subsequently long songs, there are a lot of possibilities to built and keep a tension, to create atmosphere and solemnity. And APOTHEOSIS OMEGA do already pretty well in creating atmospheric songs. The opening ‘Belial’ shows the way what is to expect on this album, the final ‘Daimon’ ends up a very promising album. If APOTHEOSIS OMEGA keep their course, “Vama Marga” will not be the last grand deed of this band. For more, listen at: http://apotheosisomega.bandcamp.com, read and look at: www.facebook.com/apotheosisomega or visit the label at: www.facebook.com/godeaterrec