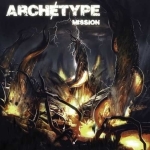 How to begin? Maybe this way: the best song is the bonus track ‘Ouverture Ambitieuse’, played with a pure orchestral instrumentation. Definitively not a good sign, because all other songs are supposed to be Metal songs. Or, to be more specific, with typical Metal instruments. After a dozen listens I am still not able to pin down a certain genre, which is not necessarily a bad thing. But ARCHETYPE are mixing different styles and influences and for some bands this works pretty fine. But not for "Mission". The band from Canada label their style progressive Death / Thrash Metal. But it is not progressive, it is simply a succession of forms without a stringent or traceable concept. Maybe the concept is to have no concept. Maybe I am too old, too young, too mainstream, too underground, whatever. During the one hour playing time of the band’s debut you will find: influences of bands like CRYPTOPSY, early KATAKLYSM and MACABRE. This mixture works pretty fine, saving the album from being a complete fail. But there are lots of sequences which leave me dazzled and confused. Soloing and fiddling far beyond the normal scale, clear vocals and declamatory spoken parts. The songwriting is far beyond the usual Metal scheme, more like a Jazz or Classical music. Those who dare should check out the following sites: www.facebook.com/archetypemtl, https://archetypemtl.bandcamp.com