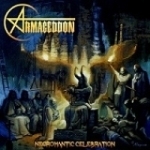 I usually try to avoid these one-man project bands ’til the day of the world (this of course, excluding Quorthon and his mighty BATHORY. R.I.P.) but sometimes they turn out to be worth your precious time – just like this La Madeleine, French-based ARMAGEDDON. ARMAGEDDON was started about 10 years ago by a guy named Silvere ‘Armageddon’ Catteau. The guy was heavily inspired by Black, Thrash and Death Metal bands of the early days, so hence he wanted to try out his own wings alone, using the moniker ARMAGEDDON for his musical perversions. In 2002 he finally got his first full-length album (or demo) out, titled "Through The Endless Torments Of Hell", which basically gave Silvere an optimal opportunity to hack the name ARMAGEDDON into a grey stone for good. Since his debut album was released, Silvere became busy with some other activities in his life (f.ex. with bands like LORD, UNHOLY WAR and EXCRUCIATE 666, among other things). Then came early 2010 – and Silvere was back to write some more songs for his solo project. However, it was not until summer 2011, when he got his 2nd album completely finished. "Necromantic Celebration", including 10 songs in it, is – to put it simple, blackened Thrash Metal that has surely got its main inspirations clearly from early BATHORY, VENOM, DESTRUCTION, RUNNING WILD and MERCYFUL FATE (without King Diamond’s signature falsetto vocals though) records. Silvere has gone back to the stripped down sounds of evil and raw Metal sounds on "Necromantic Celebration" – and without exaggerating one damn bit, there’s some strange yet still very appealing charm to the songs he has composed for this record. An unholy matrimony of both raw, unpolished and straightforward Thrash Metal and some Black Metal overtones, is actually that thing he does surprisingly well and enjoyable way with his ARMAGEDDON. The whole record sounds the type of thing like it would have come out some 20 years ago, so how one could not possibly like this record? I like it pretty much even if in the same breath it must be said that there are no originality factors to be found from here. I guess it’s more like a question about a longtime Metal fan using some of his main band inspirations and influences for his own record more than anything else really. If he’s happy with that, why you would not be? Just try this to find out yourself whether you like it or not. That RUNNING WILD cover song ‘Branded & Exiled’ on this very record in question, however, was a pretty lackluster performance all in all (sorry Silvere). The record could have survived without it too. Anyway, as wholeness, "Necromantic Celebration" is not that of a brain-melting Metal record of all brilliance by any means but it’s still good and worth listen nonetheless. www.myspace.com/dieatarmageddon.com, www.emanesmetalrecords.com