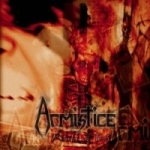 Well, how should I begin? Frank sent me the promo of these Munich based Thrashers and I have listened to this album again and again and again and really tried to make my mind clear… but to be honest, this is one of the most boring Thrash Metal albums I’ve been listening to for the last years. To describe the music: mid-tempo based Thrash Metal with a hoarse shouting voice. But why is it so boring, why? The riffs are nothing new, if you are into extreme music you’ve heard these riffs like ten thousand times… to make it even worse they picked the uninteresting ones. If they would have copied the masters of Thrash Metal like SLAYER or DEFELESHED or (add your fave here) then I could write they copy them, but so? The production is also mediocre. It doesn’t sound like a DARKTHRONE rehearsal tape, that not. But there is no energy, just sterile atmosphere. The musicians know to handle their instruments, no 16 year old kiddies playing here, but somehow the band didn’t manage to play good songs. Not to play and record, but in addition the songwriting lacks of inspiration, too. I really expected more from ARMISTICE. Haven’t heard or listened to them before, but the band-history goes back to 1992, five CD-productions and 130 live shows. The promo I got is really great with videos, mp3, info in different language etc., so I wonder why the music isn’t on that level. On the promo is a live-video from an older song, that one song is better than the whole “Roots Of Evil” CD. So maybe they changed their style or for the next time in the studio ARMISTICE should try to get the live atmosphere and energy taped. I think they can do much better than on “Roots Of Evil”. www.armistice.de.