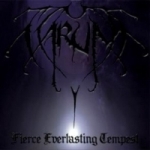 This Brazilian five piece originally used to be called GRUUNKS, but they luckily decided to change their moniker into ARUM in 2000… I wise decision, even though I won’t necessarily consider ARUM the perfect choice either. But anyway, musically there’s hardly anything to complain about. The band delivers a furious and raw mixture of Black and Death Metal with strong guitarwork, impressive melodies and some effectively incorporated acoustic parts. Never too melodic, but always composed interesting and brutal enough to keep your attention. Unfortunately the whole album suffers from a very poor mix, which means the vocals often pretty much get lost in the overall recording. The result is a kinda messy and partly even noisy sound. And because of that it can turn into a real pain in the ass to listen to “Fierce Everlasting Tempest” in its entirety. So, if the band should either get the opportunity to do a remix of this album or otherwise to exterminate this problem on their next release, the future is definitely wide open for them. Cause all in all they’re definitely a promising act to keep an eye on. Contact: Demise Records, P.O. Box 325, Timoteo / MG, 35180-000 – Brazil, www.demiserecords.com