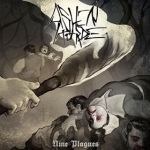 Solo projects are usually not a thing to get me excited. I know this sounds narrowminded, but all too often I’m having trouble to get into the personal and abstract world with many weird emotional breaks and jumps. BATHORY is one of very, very few exceptions that nailed it. I’m not too sure if ASHEN HORDE from the USA could prove this wrong, but at least "Nine Plagues" turned out to be a really nice surprise. It’s made or broken by the qualities of Trevor Portz (who you might know from BITE WOUND or FETAL HYMEN) and in some times he does a remarkable job. Tracks like ‘Feral’ and ‘The Stranger’ have some cool and catchy parts. The style is described as progressive Black Metal but to me it sounds like Death / Thrash. "Nine Plagues" is released on Mandol Records which seems like a private label, considering it released all the other ASHEN HORDE releases and nothing else. These are the EPs "Ab Initio" (2013), "Obcisus" (2014) and "Feral" (2015), the single "Echthros" (2015) and the bands first full-length "Sanguinum Vindicta" (2014). Not having heard any of these, the production on "Nine Plagues" is tight and clear, yet powerful and heavy enough. The vocals, that reminded of REVENANT, suit the music, but could have been meaner and more powerful in the end. The dual vocals turned out better here. The instrumentation is nothing but excellent. Because of this I’d suggest to take a listen first. It is in no way bad and deserves your attention at least. I’m really curious how ASHEN HORDE will develop and in the meantime, support talent like this! All further information at: www.facebook.com/ashenhorde