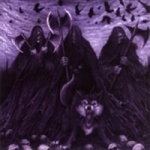 I read a lot about this outfit in the last 1-2 years and "Antichristian Metal Axe" is finally the first output from them which I’m able to listen to. Therefore you can understand that I listened to this CD with high expectation. ATTACKER BLOODY AXE is a Chilean (Black) Thrash Metal outfit in the classic three-piece-formation (e. g. old VENOM, SODOM, old KREATOR, old DESTRUCTION, MOTÖRHEAD…). Obviously you have two parties in Chile, the one being the brutal Death Metal side with the likes of ABREKADAVER, UNAUSSPRECHLICHEN KULTEN, MAGNANIMVS, GODLESS and some more and the other side bands who stick to violent Thrash Metal as FORCE OF DARKNESS and obviously ATTACKER BLOODY AXE which can be easily listed to the 2nd party with its blackish Thrash Metal in the vein of mainly old DESTRUCTION, KREATOR or DEATHROW (which I read in an interview with them and actually be able to confirm this influence), when talking about the Teutonic Thrash Metal and very old SLAYER and VENOM whereas the drumming reminds me a lot to the straight MOTÖRHEAD way of beating the skins. A certain RUNNING WILD vibe is listenable, too, if you ask me. The vocals are utterly overloaded with reverb, which suits very well to the 7 songs on this disk, though it sometimes reaches the border of being a little bit too much for its own good (my opinion). To put it this way: if you are into old fuckin’ Thrash Metal located chronologically in the mid 80s you won’t do anything wrong checking out this fine piece of Thrash Metal from a supportive band from Chile. The Thrash revival is one thing; with ATTACKER BLOODY AXE you get a band which is a true piece of supportive Metal music through a nice little underground label. You can contact the band at viktrolltaar@hotmail.com and the label at carlos@kuravilu.cl. Ask them for Metal mailorders selling this release.