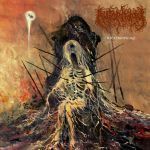 AUTOPHAGY comes from Portland, USA, where seemingly are hundreds of bands playing this ultra downtuned, muddy Death Metal with low, monotonic vocals buried deep down in the mix, which nowadays passes as caveman old school Death Metal or whatever youngster call it. Basically, half the appeal of such albums is the way they sound (if you like that sound) – very low tuned guitars and bass and the whole muddy production which is supposed to give it “heaviness”, but in fact it becomes very boring very soon. They’re obviously influenced by AUTOPSY, INCANTATION and Finnish Death Metal bands from the ’90s – you know, mid-paced stomp, fast outbursts and slow, tortured doomy passages. And that formula is applied for all the tracks. Now a couple tracks of this controlled mess can be quite entertaining and enjoyable, but even at only 33 minutes this album seems to drag on for too long. I guess this trend of OSDM (although it doesn’t really sound like anything that was recorded in the ’90s) is becoming too much for me and one has to sift through a lot of mediocre shit to find some gems. The main problem is the lack of ability to write a memorable songs and that’s the main difference between the masters and the followers. Even the song titles are such cliched and uninspiring. Maybe I’m being too harsh here, after all this is only their debut album and I’ve heard worse shit, but that’s hardly a compliment, eh? Check out for yourself, meanwhile I’ll go back and listen to the new AUTOPSY again. More info you will find at www.instagram.com/autophagy_official or www.facebook.com/pulverisedrecords