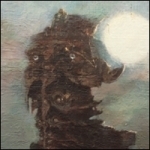 The Finnish Ahdistuksen Aihio Productions just released this debut "Chapter I" from German Black Metal duo AVE MARIA. In 2008 they already released a demo entitled "Doctrines Of Desolation", pt. I on Kult of Nihilow. Since I missed this one, I can’t tell you about any progression on "Chapter I", so here we go. The twisted cover, done by Denis Forkas Kostromitin, deviates from the usual black / white warlike ritual album art and so does the music. The tracks are mainly on some lower speed and defined by the restrained and almost chilling drums. The guitars set an avantgardish nature by creating rich dynamics in multi-layered simple structures. The melodies seem to follow their own path, but all heading for a climax, supprted by the manic vocals of A. Sometimes it’s like a slower but equally intense version of FURIA (‘Sonic Touch’), a lofi version of downtuned NEGURA BUNGET or a less militant THORNS (‘The Cloven Psalmody’). Add a dreamy and hallucinating sound of NEGATIVE PLANE or even THE CHASM and you have something pleasantly cold, instead of freezing. Speedier outbursts are rare (‘Impulses From The Sphere Of Broken Larynx’ and ‘Meandering Through The Tunnel Of Trance’) and usually dissolve in the lot of psychedelic riffs. The production done in The Temple of Chains (mastered at Helssound) sounds shallow, but not too raw. The guitars sometimes sound too much on the edge, but this fits the stifling atmosphere. Kind of like a less dry and woolly "Storm Of The Light’s Bane", to make a stupid comparision. All in all a strong debut and a new talented name to the list of more experimental Black Metal bands. Hopefully this is the first succeeded episode in something huge! Also released on vinyl by Kult of Nihilow. For more info, write to ahdistuksenaihio@gmail.com or fleshpress@hotmail.com. Or visit http://ahdistuksenaihio.com and http://cfprod.com/kon/.